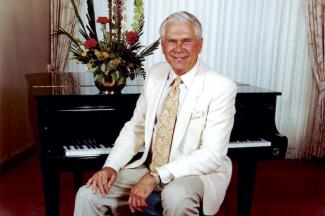 Anderson University is paying tribute to Johnny Mann, Grammy Award-winning composer, arranger and friend of the university, with the unveiling of his portrait.

On Friday, February 4 at 3:30 p.m. in the Vandiver Gallery of the Thrift Library, Betty Mann will present a portrait of her husband to the Johnny Mann Center for Commercial Music, which is part of The South Carolina School of the Arts (SCSA) at Anderson University. There will be a reception following the presentation of the painting to Dr. David Larson, South Carolina School of the Arts dean, and Dr. Evans Whitaker, president of Anderson University. Among the special guests attending will be Andy Waterman, who worked with Johnny Mann to produce several of his records.

The idea for the portrait came as Betty was viewing watercolors by Jamie Hansen, a local watercolor artist and the wife of South Carolina School of the Arts Professor Chris Hansen, at the Anderson Arts Center one evening.

“Jamie was showing her watercolors of musical people she had done,” Betty recalls. “While we were there looking at them, my friends and I, a couple of the people said ‘we should have one of Johnny Mann’ because of his music. So I talked to Jamie about how possible it would be. She came over to the house and talked to me and I showed her a photograph that I thought would be appropriate; so from that, the photograph that’s hanging in my house, she did the watercolor.”

When the Manns would visit their daughter and son-in-law, who had moved to Anderson, South Carolina, Johnny came to love the area.

Looking back on their decision to move from California to Anderson in 2005, Betty said, “We looked at it very seriously and I can tell you there was no doubt about the fact that the Lord orchestrated that whole move. John loved Anderson; he really enjoyed being here.”

While living in Anderson, Johnny became involved in Anderson University’s events and programs, writing a new alma mater, “The Sounds of Anderson.” Betty also has fond memories of Johnny standing on the stage with President Whitaker when the fine arts program became branded The South Carolina School of the Arts.

During his association with Anderson University, Johnny was instrumental in establishing the commercial music program at The South Carolina School of the Arts. He drew on his decades of experience in the entertainment industry. He was arranger/director for numerous TV shows, including the Danny Kaye Show and the Joey Bishop Show. In the seventies, he had his own nationally syndicated variety show, “Stand Up and Cheer,” best known for its patriotic flavor. The Johnny Mann Singers recorded numerous albums and crafted radio jingles for major market stations in San Francisco and elsewhere. Johnny Mann was also the original voice of Theodore in the hit animated series “Alvin and the Chipmunks.”

Dr. David Perry, chair of the department of music in The South Carolina School of the Arts, has wonderful memories of Johnny’s interactions with students and professors at Anderson.

“Johnny Mann quickly endeared himself to our music majors in the Department of Music when he led a performance of a couple of his compositions at the President’s Gala in his last years with us. I remember his setting high standards while having great fun with the students, and the students responding enthusiastically to him when he was directing them, and interacting with them one-on-one. While he was a consummate musician, he was also affirming of our students and our faculty, and his enthusiasm for life, for music, for the Lord and for people will remain in my memory as a legacy that he brought to Anderson University and to me personally,” Dr. Perry said.

After Johnny passed away in 2014, President Whitaker publicly honored his memory by announcing the creation of the Johnny Mann Center for Commercial Music during his memorial service.

Dr. Derick Cordoba, director of the Johnny Mann Center for Commercial Music, characterizes Mann as “a really great example of a successful career in the industry.”

Cordoba continued, “He worked with all kinds of A-list type people and had a really diverse career, which is what we strive for for our students. We try to give them exposure to a lot of different avenues in the music industry because every musician has to be an entrepreneur these days.”

Betty continues to be a part of the Anderson University community, volunteering and attending events.

Mann’s portrait will reside in the Rainey Fine Arts Center, which houses The South Carolina School of the Arts at Anderson University and the Johnny Mann Center for Commercial Music.