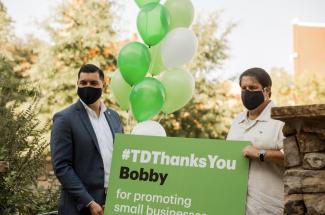 Anderson University College of Arts and Sciences professor Bobby Rettew was honored for his work providing pro bono multimedia services to downtown Anderson businesses struggling because of the COVID-19 pandemic.

When COVID-19 hit in March 2020, local businesses in Anderson responded to pandemic-imposed restrictions in whatever way they could, not only to survive, but also to reassure their customers. One business owner, who’s also a professor in the Anderson University College of Arts and Sciences, took to heart what was going on and decided to provide his services to downtown businesses at no cost.

That summer, Rettew began approaching fellow business owners in Anderson, offering to shoot a free video to promote their products and services. The result was Storefront Stories, a platform Rettew created so that merchants could talk about their businesses. While at first some business owners were skeptical, the idea began to catch on.

“I told them there would be three questions. We would record it, do a couple of shots of B-roll and then I would put it on the website,” Rettew said. “We started doing one, two, three, four and people started asking about it, so I created a place where people could fill out an application to do it. One morning I got up and there were 25-plus.”

Going out to all of those businesses was hard work. Rettew personally carried his gear out to shoot as many as five videos a day.

“We were meeting people for the first time in person. We got to know each other and built relationships… and so the stories were amazing. We had people crying, talking about how they were struggling, how they had to lay off and furlough employees, how this was the hardest thing, how they were so thankful for this,” he said. “We just captured some really good stories.”

“I thought it was really kind and generous that Bobby took it upon himself to reach out and showcase local businesses,” said Donna LeBrun, owner of City Seed at the Station.

“We were all scrambling and trying to think outside the box… I thought it was ingenious on Bobby’s part to come up with Storefront Stories,” said Gay Love McLeskey, owner of the Kitchen Emporium and Gifts. McLeskey commented that they pivoted to offering more grocery items while doing what they could to help other business owners.

“He’s a good guy and we’re really thankful to have been a part of Storefront Stories,” said Mark Brannon of Palmetto Screen Print and Embroidery, adding that Rettew often asks him if there’s anything he can do to help. (Brannon’s business also printed up “Anderson Strong” T-shirts, designed by Anderson University alumna Caryn Scheving, which has been sold at more than a dozen local businesses.)

“We started looking at the analytics and they were getting thousands of views on social media. People were sharing them. I was getting thank you notes. I was meeting new businesses that I had never met before,” Rettew said. “It was like this rich community of people sharing stories that was a collective story of Anderson, how they were trying to overcome COVID in the retail space.”

Luis Martinez, commercial relationship manager for TD Bank, received an email about “TD Thank You,” a request to submit stories about local customers who were helping their community.

“I immediately thought about Bobby because he started to roll out these Storefront Stories,” said Martinez, who submitted Rettew’s name for consideration. “I didn’t hear anything for about three weeks, then I received a phone call saying that Rettew Creative was the winner for South Carolina. About a week later, I got another phone call that Bobby was one of six stories picked up nationally.”

Martinez called Rettew, who was in the middle of a shoot, to come to Carolina Wren Park where a celebration was waiting for him. TD Bank, along with local economic development officials, presented him with an award and a cash prize recognizing his support for other small businesses during the COVID-19 pandemic.

“I think every one of our TD locations in Anderson had a sign with Bobby’s face on it holding the award we presented him,” Martinez recalled. (Martinez is also an Anderson University alumnus.)

Looking back on that special day, Rettew feels that it wasn’t just about him.

“It was like TD Bank recognized Anderson,” said Rettew, who has kept the stories up on his website and is planning to have his communication students do updates with the business owners in fall 2021.

“As a faculty member, my goal is to use this as a teaching tool this coming fall and work with students to go out and get an update on their stories,” Rettew said. “This will be a great teaching tool for doing production, soft skills in meeting people, going to the client, interacting with them and creating deliverables.”

“I never thought about this, but it was probably one of the best PR initiatives I had ever undertaken,” Rettew said. “I was able to meet people, they met me and we created this online space, just sharing, interacting and telling stories.”