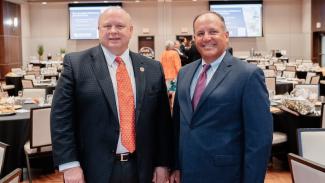 Higher education plays a key role in this state’s economy, according to South Carolina Chamber of Commerce President and CEO Bob Morgan. Morgan was keynote speaker for a Board of Visitors breakfast August 25 at Anderson University.

In introducing Morgan as speaker, Anderson University President Dr. Evans Whitaker commented that he values the important roles that institutions like Anderson University play in educating and equipping the next generation of workers to ensure economic prosperity.

Addressing an audience that included Anderson University’s Board of Visitors and Anderson University administrators, along with community and local chamber leadership, Morgan gave an overview of economic development in South Carolina, pointing to strengths in manufacturing and agriculture and stressing the importance of Charleston as a key port in the Southeast. He noted that in many areas—for example, ports and peach growing—South Carolina outperforms neighboring states. He also gave the South Carolina Chamber’s perspective on state legislation affecting economic development, including infrastructure improvements that are essential to attracting more industry.

“Higher education, including Anderson University, plays a much larger role in our economy than most people realize. You all are a major employer in this market and our state. You’re part of the workforce development challenge that is so critical to our economy. You bring dollars in from out of state,” Morgan said.

Established in 1989, the Anderson University Board of Visitors is made up of outstanding men and women who occupy positions of significant leadership and influence. These individuals are selected on the basis of their willingness to share their ideas, initiatives and resources for the benefit and advancement of the University. Details can be found on the Anderson University website.