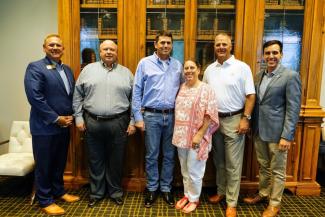 In appreciation for the gift, the lobby of the new football field house will be named for Network Controls. Within this lobby will reside the Trojan Athletic Hall of Fame.

Network Controls owner Ed Niles, along with his wife Liz, joined President Evans Whitaker, Coach Bobby Lamb and other Anderson University officials July 22 to finalize an agreement to provide the gift for the Trojan Football program.

During his years at the helm of Network Controls, Niles says he has watched Anderson University grow as his own company has grown. For him and his wife, this gift flows from their commitment to Christian education as well as their love for the game of football.

“With Anderson University being a Christian-based school, that really is near and dear to my wife's and my beliefs and how we would like to be able to support within our communities,” said Niles. “Network Controls has been blessed to be in a position that we can financially do this.”