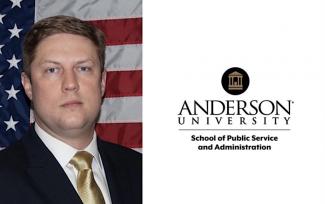 Steve Miano, a 2017 graduate of Anderson University’s School of Public Service and Administration, was sworn in May 17 as the new police chief for the town of Edisto Beach, South Carolina.

Anderson University graduate Steve Miano has been busy learning about the nuances of police work in this quiet seaside town located an hour’s drive south of Charleston.

Steve Miano, a 2017 graduate of The South Carolina Command College, part of Anderson University’s School of Public Service and Administration, was sworn in May 17 as the new police chief for the town of Edisto Beach, South Carolina.

A native of Aiken, South Carolina, Miano has been interested in law enforcement from childhood. Before finishing his undergraduate studies in college, he started an internship with the Aiken Department of Public Safety, which began his several years of law enforcement service to his hometown. He went on to work for the solicitor’s office for the Second Judicial Circuit, where for four years he served as chief investigator.

More than a dozen years into his law enforcement career, Miano knew he loved his field and wanted to continue in it; so he sought further education.

“I wanted to learn more about how to lead in this profession and how to manage,” Miano said. “There are a lot of small components to it that a lot of people don’t understand, from budget to human resources to just learning how to dissect the law, especially when new court decisions come out; how does it affect you and your people?

I did a lot of searching and landed with the Command College. There are other programs online, and I wanted to go in person to have the experience of being with my peers so I could learn from them as well and the struggles they’re going through.”

When Miano learned about International Justice Mission (IJM) from some friends at his church, he began praying and seeking God’s will about becoming involved in their organization’s fight against human trafficking.

Just prior to his graduation from Command College, Miano went to work for IJM in the west African nation of Ghana. For the next three years, he worked with local law enforcement agencies, prosecutors and social workers to combat human trafficking. During that period, Miano notes that they were able to free more than 200 human trafficking victims. He feels a sense of accomplishment from being able to mentor Ghanan law enforcement and others as they continue to fight human trafficking and bring traffickers to justice.

Since becoming Edisto Beach’s police chief, Miano has been busy learning about the nuances of police work in this quiet seaside town located an hour’s drive south of Charleston. While his department gets many of the types of calls other small town departments get, they might also have to deal with an alligator in a neighborhood or somebody harassing sea turtles on the beach. Edisto Beach Police also relies on collaborations with the Colleton County Sheriff’s Office, Edisto State Park, the South Carolina Department of Natural Resources (SCDNR), the U.S. Coast Guard and other agencies.

“Where most populations are steady, we tend to turn over thousands of people on a weekly basis,” Miano said. “There are several unique rules and regulations that we have, some of those relating to golf cart usage, bicycle usage, lights on the beach and things of that nature… hurricanes and tropical storms; that’s another element for this department that most people don’t have to deal with.”