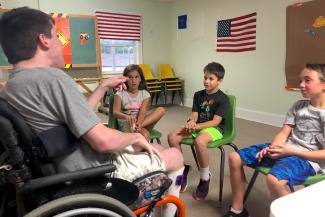 Logan Wires, a student in the Anderson University College of Christian Studies, has not let cerebral palsy slow him down as he pursues God’s calling on his life.

Born and raised in Anderson, Wires chose Anderson University because it was a short commute, so his family could still take care of his needs.

“I’ll never forget when I went on the (campus) tour and everybody prayed for me. I realized that’s where God wanted me to be,” Wires said. “It’s been an unbelievable ride ever since.”

During the summer, Wires, a Youth Ministry major, has been interning at his home church, New Prospect Baptist Church in Anderson. He’s been serving with Youth Minister Jay Roland, an alumnus and also current M.Div. student at Anderson; and Dr. Bryan Cribb, professor of Christian Studies at Anderson, who also serves as preaching pastor at New Prospect.

“I’ve discovered since coming to AU there’s a lot more to youth ministry than just playing games and having fun. You’ve got to build relationships with students and be there for them,” said Wires, who has been a part of the church youth ministry’s new small group program, where he works with a group of middle school boys.

“God has shown me that kids have tremendous potential to serve Him and do the things that He’s called them to do, but they need somebody to come alongside them, support them and believe in them,” Wires said.

Roland has gotten to know Wires over the past three-and-a-half years and is impressed by his positive attitude and his love for his church. He quips that Wires has been his “unofficial intern” for about three of those years. He appreciates Wires’ commitment as he fills in wherever needed, whether it’s leading children’s church, a student Bible study, or an online devotional.

“What impresses me most about Logan is his ‘can-do’ attitude. One of my favorite ‘Loganisms’ is, ‘obstacles are just opportunities.’ He truly believes that and lives it out. He does not let his physical disabilities get in the way of anything he feels like the Lord has called him to. Despite facing different and more difficult challenges than most will have to face, Logan continues to persevere in his faith, his academics, his church work, and in all other areas of his life,” Roland said. “Logan has been an awesome intern but he is a better friend. Knowing and loving Logan has made me a better Christ-follower, leader, and friend.”

As both Wires’ pastor and professor, Cribb says he’s a “tremendously” hard worker.

“What truly stands out about him is that he genuinely loves people. He possesses an irrepressible and infectious joy and he encourages all he meets,” Cribb said. “As a member of New Prospect, Logan was already serving consistently and faithfully in our youth ministry. But through the internship, he has been able to have other opportunities of service, including preaching in both of our Sunday morning services, leading in a Sunday night service, and teaching the group lessons at Vacation Bible School. Logan has been and continues to be a wonderful blessing to our church.”

Cribb continued, “We love our College of Christian Studies students to have internships in healthy churches in our community. Internships like this one inform and enrich the classroom experience for our majors, and in turn, the classroom learning enriches the internship and service opportunities. Ultimately, these internships form and shape our students for a lifetime of ministry for the glory of God.”