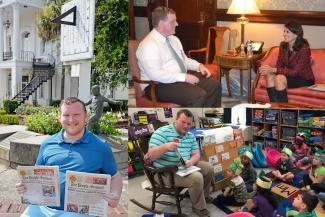 As the Barnwell People-Sentinel’s new owner, Anderson University graduate Jonathan Vickery enjoys giving back to the community, whether covering local government, interviewing notable public figures or reading to a group of school children.

Jonathan Vickery, a graduate of the Anderson University College of Arts and Sciences, is the new owner of The People-Sentinel in Barnwell.

Vickery has been on staff at The People-Sentinel since 2010, after graduating in December 2009 with his Communication degree. He feels strongly that community-minded journalism is essential to running a newspaper in the digital age. He bought a weekly newspaper that serves the small town of Barnwell from the previous owners, Gannett, a major mass media company that owns USA Today and other newspapers across the nation.

Since assuming ownership from Gannett July 1, 2021, Vickery says The People-Sentinel has received “a ton of support” from the community.

“We’ve gained over a hundred new subscribers in just the first two months and several new advertisers. It’s been an exciting time,” Vickery said. “It’s been a lot of hard work, but it’s been very rewarding.”

Born and raised in Barnwell, Vickery isn’t a newcomer to the newspaper or the community. Members of his small staff are also Barnwell County natives. The People-Sentinel has been a big part of his life, starting in high school.

“I’ve always loved to read and write, and I’ve loved photography since I was a child,” said Vickery. His introduction to journalism came in high school when he and his classmates created a monthly page that was carried by The People-Sentinel.

“That really sparked my interest, and then I decided to pursue a mass media communication degree at Anderson,” Vickery said. Some hometown friends were students at Anderson University, so he decided to visit the campus and fell in love with it. As well as getting a well-rounded education in mass communication, Vickery also was involved in RUF (Reformed University Fellowship) and helped AU’s Alumni Relations Office with their annual phonathons.

“I love the tight-knit atmosphere and, being a Christian college, that appealed to me as well,” Vickery said. “Dr. James Duncan really helped prepare me for my future career. He and Dr. Teresa Jones from the English Department were two of my favorite professors there. They really helped prepare me for a career in journalism by making me a stronger writer and exposing me to some of what I would encounter in the communication field. Originally I thought I was going into TV; that’s what I did my internship at WYFF News 4.”

Instead, Vickery pursued a job opening back home at The People-Sentinel. He hasn’t looked back or regretted his choice. Vickery contends that he doesn’t seek awards and recognition, but has received numerous awards from the South Carolina Press Association over the years.

Vickery feels that returning The People-Sentinel to local hands means more freedom to pursue stories that really matter to the community. It means that the content and how it’s presented is now locally produced. Also, since many people from Barnwell County who’ve moved away still want to be connected to news from home, Vickery says they are developing a new website and hopes to bring it online soon.

Vickery calls Barnwell County a special place where the community comes together to help folks in times of need. He counts it a privilege to rally support for someone who lost their home in a fire or celebrate the life of someone whose life was cut short in an automobile wreck.

“We have to cover the bad stuff, but I receive the most joy when covering positive news—awards people get or huge accomplishments people make,” Vickery said. “I guess you’re familiar with the term ‘refrigerator journalism.’ I love when people cut out a clipping from the paper and stick it on the door.”

A particularly moving story for Vickery came recently when the newspaper returned to local ownership.

“I got a really sweet handwritten note from one of our senior subscribers. She and her husband are both in their seventies. She wasn’t going to renew her paper when it came due, because the print and photos had just gotten too small and hard to read,” Vickery recalls. “Then after the change in ownership she noticed the design changes. It was a lot easier to read and more attractive, so she enclosed her check with a letter to renew her paper. That’s just one of the successes we’ve had since going local.”

The People-Sentinel has provided factual, unbiased reporting since 1852, and Vickery looks forward to continuing that tradition for years to come.

“Many years ago I read an anonymous quote about journalism that stated: ‘Journalism should be memorable not because it’s sensational, but because it’s real.’ The meaning behind this has stuck with me ever since and is what inspires my journalistic mission,” said Vickery.