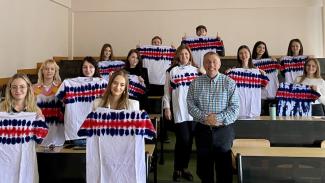 Dr. Kent Saunders, a professor at the Anderson University College of Business, is pictured with a group of his students in the Moldovan capital city of Chișinău.

Dr. Kent Saunders, a professor in the Anderson University College of Business, taught business classes at the Academy of Economic Studies of Moldova (ASEM). As a Fulbright Scholar, Dr. Saunders’ travels were funded by the program.

“Faculty, which I am, can either be pure researchers or pure teachers or a combination of both. My application was specifically for teaching; however, I did both. I did research and teaching during my Fulbright,” he said.

At ASEM Dr. Saunders taught courses on capital markets, including international capital markets. While teaching Moldovan business students, Dr. Saunders found some common ground, but also striking differences. He observed that many of his students were eager to learn and readily grasped the calculations and problem-solving skills he taught. On the other hand, Moldovan students are faced with limited opportunities in a country whose economy is primarily agricultural.

Moldova is a nation smaller in size than South Carolina, both in terms of population and land area. Its GDP (Gross Domestic Product) is among the lowest in Europe.

“Some of the students commented that as they were growing up they wanted to help revive the Moldovan economy and restore Moldova to a growing country, but as they got older and were in college, they actually want to move to Western Europe or somewhere out of Moldova where they earn a higher rate of pay commensurate with their amount of skills compared with peers worldwide,” he said.

Noting the differences in the academic year, Dr. Saunders said that during the spring semester, academic content is compressed and students have internships during the final month of the semester.

A former Soviet republic, Moldova is landlocked and borders Ukraine and Romania. Moldova also has in its history a long list of conquerors. The Ukraine crisis next door hit close enough to prompt Dr. Saunders to relocate during the spring semester.

“I actually relocated from Moldova to Romania. Romania being a NATO country where Moldova is not, it felt safer there and was recommended by the embassies in both Moldova and Romania. In any case, I was in Romania for about the last month of my Fulbright.”

While at Bucharest, the Romanian capital, Dr. Saunders volunteered at a Holy Trinity Baptist church as they helped Ukrainian refugees.

“Any male between 16 and 60 had to stay and fight; they weren’t allowed to leave. So it was mostly females with their younger children. I was able to speak in English with a few of the 14-year-old Ukrainians. They were actually helping to volunteer as well when they didn’t have a permanent location. They just wanted to get out of the country and they were just staying in Bucharest,” he said. “They were usually thankful for the support they were being provided. They were being given food, shelter, and a place for their children to play.”

Looking back on his months in Eastern Europe, Dr. Saunders experienced life much differently from what Americans are accustomed to. He noted that the heat in his apartment wasn’t turned on until well after the weather turned cold—apparently a hallmark of energy dependence from outside their borders.

“By staying there for a longer period of time, I was able to experience more of the differences… I’ve been on a week-long and 10-day trips, but I was able to gain an even deeper appreciation for the differences and what people take for granted and what opportunities are available,” he said.