Bill and Grace Brissey Endowed Scholarship born out of love for students, commitment to their success 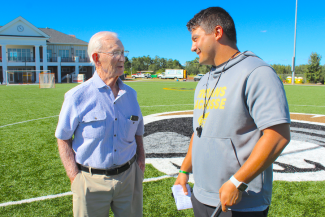 Out of his love for Anderson University and a longstanding commitment to helping young men and women access educational opportunities, Mr. Bill Brissey established the Bill and Grace Brissey Endowed Scholarship in honor of his family and his late wife, who was his strength.

Mr. Brissey says of his wife, “Grace probably had more talent than anybody I’ve ever known and she had more confidence.” Grace was also known for her business acumen, having been involved in the operations of the Brissey’s business interests, which included local radio stations in Anderson and Belton. She was also a pioneer woman builder in the Upstate and had worked in Sen. Strom Thurmond’s office.

The Brisseys wanted to help as many Anderson University students as they could, so in 2012 they set up an endowed scholarship, awarded on the basis of financial need and academic promise.

Mr. Brissey grew up around football and played up to the college level. Before building a successful real estate business in Anderson, Mr. Brissey coached football for many years, including locally at Belton High School. While he has coached many young men over the years, he really cares more about the development of a young person and supports educational opportunities through the endowed scholarship and other means.

Growing up very close to the Anderson University campus, Mr. Brissey, whose great uncle, Will Brissey, was among the founding board members when Anderson was established in 1911, has fond memories of the University going back to the days when Dr. Annie Dove Denmark was its president. He recalls how Dr. Denmark was very protective of female students, keeping a watchful eye on young men who were courting the ladies.