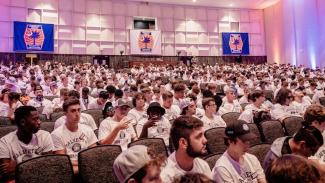 Anderson University counts it a privilege to host rising high school seniors from across South Carolina and their counselors for a week of building leadership skills.

A group of 700 rising seniors from high schools across the state came to Anderson University to learn lifelong lessons about leadership and government, make connections and then go back to impact their communities.

This year’s Palmetto Boys State took place June 12-18. The week-long leadership program involves a group of the most promising high school leaders from across South Carolina. They are selected to be part of a camp begun by the American Legion more than 80 years ago. Anderson has hosted thousands of Boys State students on its campus since 2011.

Palmetto Boys State was created to help develop future leaders for South Carolina. Palmetto Boys State participants are nominated by their schools and selected by local American Legion chapters to participate in “mock” government, running for office, drafting legislation and actually presenting that legislation to leadership in Columbia.

On the morning of Saturday, June 18, Palmetto Boys State concluded with a graduation ceremony.