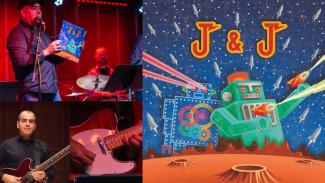 And while digital downloads of his latest work are also available, Dr. Cordoba feels there’s something special about having music on vinyl.

“I just think it's nice to have something that you could take home from a show other than a T-shirt. There’s a pretty big vinyl resurgence—a lot of people are getting back into having records,” he said. “It's a lot different to see this artwork on a twelve inch record sleeve than it is on a tiny thing on your phone. I think people are starting to appreciate that a little bit.”

The album is called “J&J” by Dr. Cordoba and a group of musicians collectively named G.E.L. (Groove Elation League). The title “J&J,” incidentally, comes from the initials of his two sons. Dr. Cordoba, who directs the Johnny Mann Center for Commercial Music at Anderson University, said that the album includes songs he began to record before the COVID pandemic, plus some new compositions.

Dr. Cordoba said, “It's all an instrumental record with two of the songs featuring Tito Carrillo, a great trumpet player who came to AU two years ago as our guest artist from Chicago. And then Kurt Reeder, who was our guest last year, plays organ on two of the songs. The band includes drummer Matt Endres, bassist Samuel Peters, Saxophone players Michael Fenoglio and Alex Blomarz and pianist Whitney Ashe. I'd say it's an instrumental album that kind of bridges rock and jazz. There's a lot of improvisation like in jazz, but there's also distorted guitars and some more aggressive music. It's four original songs and one cover song on the vinyl, and then there's an extra cover song that comes with the download code.”

The album’s cover art was created by South Carolina native Geoffrey Aaron Harris, an artist Dr. Cordoba met when he was visiting Artisphere, a visual arts event in Greenville, South Carolina. Harris creates retro-styled paintings of toys. As Dr. Cordoba pondered the kind of art that would work best on his album’s cover, he thought back to a couple of prints of robots he bought for his sons at Harris’ booth.

“I let each of them pick one of the robot images, so they picked out which robots would be on the cover. And then Geoffrey Aaron Harris created the artwork on the cover,” he said.

For the “J&J” album, Dr. Cordoba also created his own record label, something that ties in well with his teaching Commercial Music majors and other students not only about the creative process but also the business end of making an album—marketing and selling it.

To order the album, which is available on both vinyl and by digital download, visit Dr. Cordoba’s page on bandcamp.com. or go to iTunes.