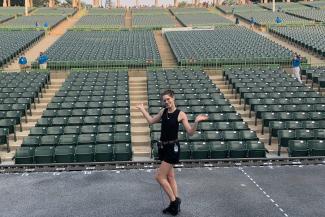 South Carolina School of the Arts graduate Davy Grace McGuirt has been there to help ensure that thousands of patrons enjoy the show at a fabled St. Louis entertainment venue.

A graduate of the South Carolina School of the Arts at Anderson University has been working hard to ensure that thousands of outdoor theatre patrons enjoy musicals at The Muny, St. Louis’ cultural treasure.

The Muny, an outdoor venue, is home to one of the largest summer stock professional theatres in the country. With nearly 11,000 seats, The Muny is described as America’s oldest and largest outdoor musical venue. During summer 2021 The Muny celebrated its 103rd season by returning to full seating capacity.

May 2021 graduate Davy Grace McGuirt says that all shows are performed outside; fortunately they’ve had only a couple of rained-out performances. She feels blessed to have the opportunity to be part of the professional theatre world and especially with this legendary St. Louis venue. It’s a great chance to build on her years of experience going all the way back to high school.

The theatre bug bites
When McGuirt was trying to navigate a new school, she became acquainted with individuals who introduced her to theatre.

“They already had auditions for the spring show but I waltzed right up to the director, introduced myself and asked her if there was anything I could do. She said ‘we actually need someone to work backstage. If you would like to do that, I would love to have your help,’” McGuirt said. “So I worked on that first show and absolutely fell in love with it. I ended up assistant stage managing with my best friend at the time. She and I just tag teamed the whole process and I learned a lot from her.”

When she started thinking of college, McGuirt wasn’t initially interested in Anderson University, but felt God was leading her to apply there.

“I came my freshman year and—like all freshmen—was terrified out of my mind and wanted to drop out as everyone does, but I had some wonderful professors and friends there pour into me and say ‘What you’ve got going is good. Stick with it and trust God who’s going to point you exactly where you need to go,’” McGuirt said. “My sophomore year came around and it was the year where I could really see God’s hand in the process with Gala and then I stage managed my first musical. Now that I’ve graduated, I can totally see that if I were anywhere else I would not be where I am today.”

As a student, McGuirt stage managed performances that included the musical “She Loves Me” and the President’s Gala, Anderson University’s premier annual showcase of music and theatre. These experiences and many more prepared her well.

McGuirt’s association with The Muny actually began the summer before her senior year at Anderson University. After working one summer at a professional theatre in Nashville, she was looking for a change of scenery. She talked to someone from St. Louis who recommended she check out The Muny.

“We played a lot of phone tag, then I had some amazing professors at Anderson write recommendation letters, then during spring break week 2020, I got a call from them,” McGuirt recalled. “It was very exciting, and then the world shut down.”

McGuirt still had the job, but instead of going to St. Louis and working productions, she and others attended weekly Zoom meetings. Despite the COVID-19 pandemic, it was still an unforgettable experience for McGuirt.

“All of the people who worked there year-round, the executive producers, one-on-one interviews with stage managers to costume designers—they really treated us well and we learned so much—even though we were all online,” McGuirt said. “Come August they said ‘we’re going to continue these meetings once a month and if you guys aren’t doing anything, when the next summer comes around, we’d love to hire you so you can actually come and work for us.’”

When McGuirt arrived at The Muny, she hit a learning curve but was grateful for how Anderson University helped her gain a strong sense of professionalism and self-confidence.

“Were it not for all of the professors and friends who poured Christ into me and made me solidify what my beliefs were, I would be struggling a lot here because it’s very different to go out into the real world and face people where we’re not all on the same page,” McGuirt said, adding that she’s learned a lot since coming to St. Louis. Through it all she’s reminded of the spiritual and professional foundation developed in her at Anderson.

“I’ve texted all of my professors to let them know how much I appreciate them and their prayers from 10 hours away and for their support,” McGuirt said.

St. Louis debut
The first show McGuirt worked at The Muny was “Smokey Joe’s Cafe.” The musical’s format and upbeat old time rock n’ roll repertoire reminded her of the President's Gala in many ways, so she quickly gained confidence as she stepped in as a production assistant.

Sometimes McGuirt has to pinch herself to realize the scope of the productions she’s involved in.

Following an opening night party, McGuirt’s assistant production manager pulled her aside and said, “Do you realize what you just did? You just opened a show for 11,000 people. Has that registered in your brain? You should be so proud of yourself.”

“I was like ‘Oh my goodness, I’m 22. This is not normal and it still hasn’t registered into my brain,” McGuirt said. “I don’t think it will be until I get home after this and absorb what I’ve done.”

Long hot days and adjusting to professional theatre have done little to deter McGuirt from fulfilling her passion for theatre. She quips that living in South Carolina’s heat and humidity prepared her well for the hot summers of St. Louis.

“We had heat advisories for 112 degree weather last week,” she said. During rehearsals outside, sunscreen comes in more handy than makeup and hats don’t hurt, either. Bugs and bug spray are also a reality of summer season, she adds.

It’s taken some getting used to going from college productions to professional ones with unions, but McGuirt appreciates the hard work and dedication of those who do carpentry, properties and scenics. While the unions are protective over what they let their workers do, she appreciates how they protect the various styles of art it takes to create a production. 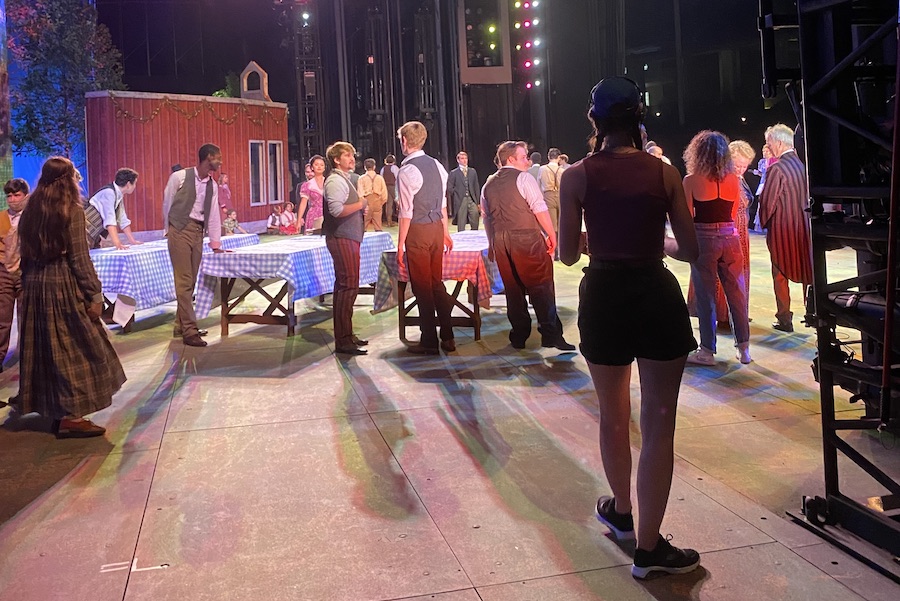 Busy but blessed
“When our shows come around, it’s a lot of rehearsals during the day, ‘teching’ and performing at night. I got very little sleep, but a lot of good experience,” said McGuirt (pictured above in the foreground). “It’s definitely really busy and I don’t have as much free time as I thought I would, but I love what I do; it’s not really work for me, so I feel very lucky.”

She adds, “Every time people ask me where I’m from, I always say Anderson University in Anderson, South Carolina, and of course none of them know what I’m talking about, but I’ve got a lot of kind compliments on my professionalism and confidence and that’s definitely something that Anderson and the people there have helped me grow.

McGuirt’s advice to anyone wanting to follow in her footsteps could apply in any number of fields.

“No matter what you do, remember why you do it,” she said. “Your understanding of that is going to come across in the joy that you bring to the work and the professionalism and the confidence you have in yourself. In terms of pursuing an artistic career, it’s going to be tough, there are going to be times that you want to throw in the towel and give up, but God has a purpose behind everything. Everywhere is a wonderful mission field and there can be some beautiful stories of redemption that can come from very dark places, so stick with it, know that God’s planting that seed in you for a reason and he’s going to grow such a beautiful flower from you.”

McGuirt hopes to one day pursue theatre work in London or, perhaps, New York. Long-term she would like to “pay it forward” and teach a future generation of students about the world of theatre.

“There are definitely a lot of avenues where I’m excited to see where God decides to take me,” McGuirt said.