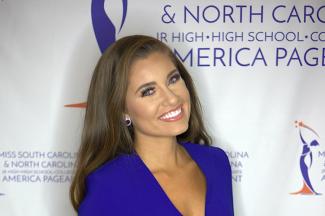 For Cadie Hall, a graduate of the Anderson University College of Education and a former beauty queen, true beauty can be found in improving the lives of her students.

Hall teaches students with moderate intellectual disabilities at Palmetto Middle School in Anderson District 1. According to Dr. Joanna Stegall, one of her education professors, Hall “has a strong passion, care and commitment—all fueled by her relationship with Jesus.”

Hall says “a series of God-led events” brought her to Anderson University, where she felt embraced by people who cared and a sense of community.

Hall was born in Kentucky and grew up in a non-Christian home. When she was four, her family moved to Chapin, South Carolina. After a few years, they moved again—this time to California. A middle schooler by then, classmates picked up on her accent and labeled her the “Southern Belle.” After a couple of years out west, Hall’s family returned to Chapin.

“I’ve kind of lived all over the place,” said Hall, who became a Christian in eighth-grade. But throughout high school she often felt isolated and alone, and a low point was dealing with hostile classmates who not only said hurtful things, but posted them on  social media.

“At one of the lowest points, I toured Anderson,” Hall said. “It was October of my senior year. I just knew as soon as they opened a session to pray for us, that was where I was going to school. God opened the doors for Teaching Fellows and other scholarships through the university to be able to go there. For that I’m super grateful.”

At Anderson University, Hall found herself in a place where she was free to be who she was spiritually and learn from her professors and others about making a difference in the lives of others.

“Having that modeled for me was really incredible,” Hall said. Hall enjoyed being a part of the AU community and even learned about swing dancing, something she still enjoys doing.

At the end of her junior year, Hall did an independent study in an EBD (Emotional Behavioral Disorder) class and fell in love with it. She graduated from Anderson with her degrees in Elementary, Early Childhood and Special Education.

Hall returned to Kentucky to spend breaks from her studies with her grandfather. He was diagnosed with terminal cancer, but Hall is grateful that he accepted Christ before he passed away. While in Kentucky, Hall entered the Miss Kentucky Collegiate America Pageant—and won.

Hall says winning the Miss Kentucky Collegiate America “opened for me a lot of doors I would not have had,” traveling widely, speaking to schools and community groups. Although Hall wore a crown, she feels her honor gave her a platform of sharing the good news about King Jesus. Her platform was also aimed at combating bullying, something she chose to do by urging others to embrace their differences.

“You have a High School Miss Kentucky and a Junior High Miss Kentucky and I was able to be a mentor to those girls, which was a huge blessing to me as well,” Hall said. “We had a great team and what we called ‘sister queens’ to be able to share the year with.”

Hall also started a blog to give hope and encouragement to others facing the challenges she experienced.

With her triple certification (Elementary Education, Early Childhood and Special Education), Hall began teaching at Palmetto Middle School. Her students have disabilities that include Epilepsy, Down’s Syndrome, Autism and other health impairments. Daily there are challenges, but also rewarding moments for Hall, such as when a previously nonverbal student expresses their feelings in a complete sentence.

“I know that God has given me a lot of gifts to be able to love—especially those who may be seen as unique or different from the rest of the world. It may just be in everyday life—somebody who doesn’t fit in with everybody else, or just doesn’t feel they belong,” Hall said. “I think we all have a place here because God doesn’t do anything by accident.”

“Cadie, like so many of our incredible alums, is daily living out the College of Education’s charge as a builder of knowledge, values and community and it is a joy to see her live out her calling as she invests in the education and lives of her students," said Dr. Mark Butler, dean of the Anderson University College of Education.

Hall is currently working on her Ph.D. in Educational Leadership at the University of Kentucky.