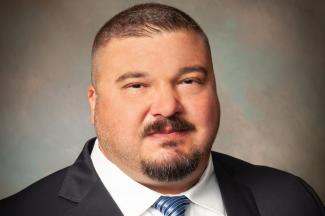 Dr. Korey Graettinger has had a wealth of experiences, but now focuses on helping veterans and on his work as a nurse practitioner.

From being on a nuclear submarine to caring for the first family, Dr. Korey Graettinger has been there and done that.

More recently, his work in COVID-19 crisis response put him on the front lines of caring for an influx of patients affected by the pandemic. He’s seen some heartbreaking things along the way.

“It’s hard to see a married couple going through the trials and tribulations of trying to overcome this virus and one doesn’t make it,” Graettinger said. On a lighter note, he adds, “I think with the increase in vaccine programs, we’re making strides in the right direction.”

Now, the 20-year Navy veteran and graduate of the Anderson University College of Health Professions has started a new chapter in life. Graettinger is working with fellow veterans in a new role at Veteran Evaluation Services for South Carolina. While continuing as a nurse practitioner on the side, he will be helping veterans with various kinds of medical services.

“What I’m doing is basically similar to what I was doing in the military; I’m doing evaluations for veterans and also active duty and reserve component service members, and then basically filing those evaluations,” Graettinger said.

When Graetttinger was younger, he didn’t consider going into health care.

“It’s kind of a funny story, but when I graduated from high school my parents said it was time to go into the military. I wanted to be a gym teacher. Then I started doing some of the medical aspects of training and engaging myself with patients and learning about trauma and field medicine,” he said.

Early on as a general corpsman in the U.S. Navy, Graettinger was accepted into physical therapy school. He spent his career working in naval hospitals, which is where he met his wife Patricia, a Williamston, South Carolina native who is also an Anderson University graduate. They met during his first duty station at Charleston Naval Hospital, where he served from 1995 to 1998. He then served Camp LeJeune Naval Hospital from 1998-2002. His military career has taken him to places like Okinawa and Guantanamo Bay, Cuba, where he served on the medical staff as the first wave of detainees from the war on terrorism arrived.

From 2006-2009 Graettinger served on the nuclear submarine USS Augusta (SSN710) as medical department representative and radiation health officer, providing care to about 150 sailors on board.

“After that duty I got hand-selected for the White House Medical Unit, so we basically were staff physician assistant equivalents to the president, the first family, dignitaries and heads of state. My post was at Camp David; it was a unique opportunity,” Graettinger said.

While he was at Camp David from 2009 to 2011, Graettinger met President Barack Obama on several occasions.

“He’s definitely an articulate politician. He didn’t interact with the staff a whole lot, not as much as Michelle and the kids did. Michelle was a very nice lady. I was one of the staff that she came in contact with,” Graettinger said. “It was a great opportunity and a unique experience; I’m grateful for the opportunities.”

“Our responsibilities were providing operational security for the Naval Academy; their command was right across the Severn River. My area of responsibility was to the sailors and the staff, so we had about 75 sailors, 200 civilians and about six officers,” Graettinger said.

When Graettinger retired from the military, he wanted to further his education, but not all institutions would give him credit for his military medical experience.

“I applied to the alternatives and then looked at Anderson University. They gave me 120 credit hours toward my bachelor’s,” Graettinger said. He’s grateful for the guidance he received when he enrolled at Anderson, helping him all the way from the beginning of his bachelor’s program to completion of his doctoral program. At Anderson he completed the Bachelor of Science in Nursing (BSN) program, then completed the Family Nurse Practitioner (FNP) and Doctor of Nursing Practice (DNP) programs.

“I had some great professors… they were all exceptional,” Graettinger said. “All of those professors really take a professional approach to teaching a field they love and it definitely shows.”

His advice to anyone considering a healthcare career is to go to a hospital or other medical facility, get to know the HR department and be willing to volunteer.

“Volunteer on different floors and in different aspects of medicine to really get an idea of what you may want to pursue in the medical field,” Graettinger said.