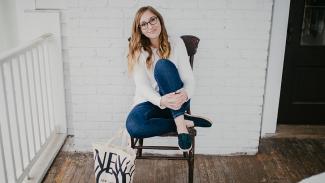 Anderson University prepared Emma Morris for life in many ways—including how to handle the disappointment that her journey ended in ways no one could have predicted.

Nearly five years ago, I stood in a hotel room in Anderson, my heels pressed against the cold tile floor while I curled my hair. Standing in front of the mirror, I read Bible verses on my phone.

It was the day of my first college visit, and I was two states away from home. I was anticipating touring a school that I only knew from pictures online. I woke up early, and I probably drank a cup of coffee before breakfast. In the stillness of that morning, I happened on Proverbs 16:9 in the hotel light: “The heart of man plans his way, but the Lord establishes his steps.”

Before I even stepped onto campus, I had a soul-deep feeling that Anderson would be home. And it was.

I didn’t know anyone at Anderson University when I arrived on campus my freshman year. It is an Anderson tradition for freshmen to begin their journey by walking under the archway on the Alumni Lawn and accepting an ivy leaf from President Whitaker. As I stood in the August heat waiting to pass through the archway and my family cheered, I hoped that the faces around me would become friends.

There were times, in the middle of the night when the floor in Denmark Hall creaked beneath me, that I felt alone. I think everyone has those moments during college.

But I quickly found that the community and hospitality I first saw at Anderson were genuine. Within weeks, I was at Cookout at midnight, jogging down Boulevard with a friend, and dancing at Homecoming. When the first snow fell in January, I caught snowflakes and walked to Corner Bagel with several friends, the ice crunching under our steps. Proverbs 16:9 echoed in my memory.

When deadlines piled up, my professors welcomed me into their offices to talk through my essays. I was a creative writing major, meaning my English professors read pages upon pages of my words. They learned who I was as a writer, and their feedback was personal. They encouraged me to voice my ideas in class, and they became involved in my life.

Throughout my time at Anderson, a cup of black coffee from Books’n’Beans became my morning routine. I found a favorite seat in the library (by the fireplace). I watched autumn leaves stick to the brick sidewalk when it rained and shadows cast across Merritt after dark. My voice joined thousands of peers singing hymns week after week at Campus Worship. I fell in love with literature in Watkins Hall, and I loved the lectures that cracked open the beauty of countless great novels even more.

I left Anderson in March without knowing that these moments would be gone, that I would not mount the steps of Watkins for class one more time or stay in Books and Beans studying until the doors were locked in the early morning hours again. The traditions of senior year that let us celebrate our memories, hug our friends, and look our professors in the eye and say thank you were broken.

I think I speak for most of the class of 2020 when I say that our last weeks at Anderson did not end like we thought they would. Adjusting to online classes, navigating Zoom, and moving out of my dorm room in minutes when the COVID-19 crisis hit were hard. At first, I focused on the lost moments: spring fever week, the senior picnic, and May commencement under the magnolia blooms.

The end felt abrupt; it was as if the ground beneath me fractured. I felt the weight of those lost moments as I closed my eyes in my childhood bedroom back home. The world was heavy as grim news reports rolled in and our neighbors suffered.

As dark as these days are for all of us, I soon realized that Anderson University prepared me for exactly where I was positioned. Anderson not only fed me knowledge, but it developed my worldview. Faculty and staff modeled what walking with Christ looks like and what faith means in my vocation. It gave me hope and purpose in a world that feels overwhelming right now.

Anderson taught me to be a friend. It taught me to think deeply, find answers and dig below the surface of a challenge. It encouraged me to be a servant leader, to help even when it means sacrificing and even when it’s hard. I learned that I have a voice and talent that can help others.

I have found comfort in knowing that when I crossed under the archway my freshman year, the Lord knew how my AU journey would end. Just knowing that God knew, that He planned these steps for me long ago, lightened the weight on my shoulders. The Lord placed me here for such a time as this. He has a purpose for the class of 2020, and every student who is walking through this, even now.

Now, in just two weeks, I’m starting my first job at a food bank in Virginia. In a time of growing needs in my community, I recognize that the Lord guided my steps here, too. Thanks to Anderson, I am proud to carry the banner of my new alma mater into a world that needs the values she has given me.