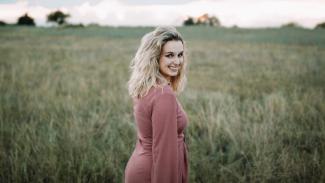 It all began with a breadbox bought at a thrift store.

Maggie McGaugh, an Anderson University Marketing graduate living in Fort Worth, Texas, was expecting a baby, and felt that instead of working a full-time job, she wanted to be a full-time mom. Soon after McGaugh had her baby son, she began an amazing adventure: sanding, staining and painting castoff furniture of all sizes and shapes, transforming chairs, desks, dressers, tables and other items into desirable pieces fetching as much as several hundred dollars. 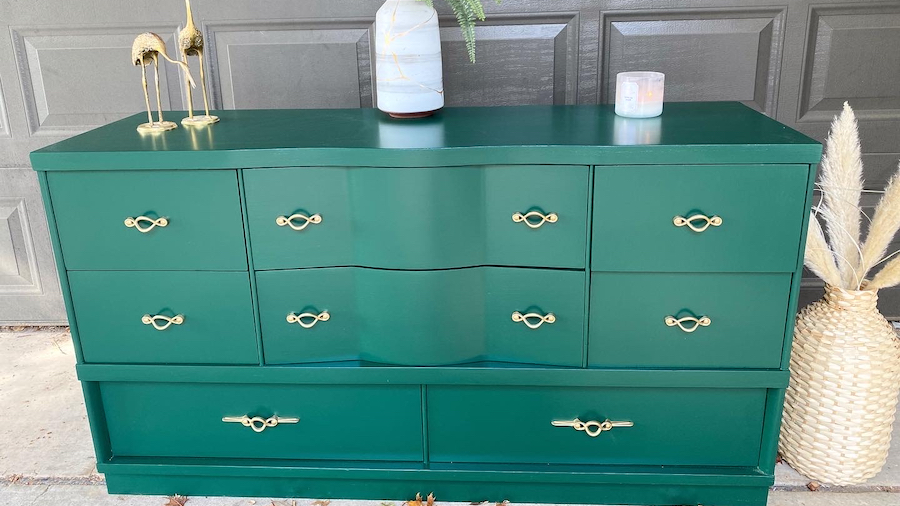 Finding furniture is the fun part for McGaugh, who has upcycled more than a hundred pieces to date.

“Almost all of my furniture flips are free or less than $20. I find many items on the side of the road in the trash,” said McGaugh, who also finds pieces at estate and yard sales as well as online apps such as NextDoor, OfferUp and Facebook. The hottest furniture styles, MGaugh contends, are mid-century modern, which sell almost immediately.

“For the first eight months of flipping, I sold everything on Facebook Marketplace and groups; however, now that my social media has grown, I have pieces selling before I even start painting them,” McGaugh said. “I’ve loved doing fun flips with vintage TVs. I turned one into a UV light plant display. Another was made into a pet bed; that flip gained national attention and even caught the eye of an HGTV producer.”

“Once I started flipping furniture, I created a TikTok. Multiple viral videos there gained me another 2,000 Instagram followers. Buzzfeed and Daily Mail did articles which got me to 20,000 in just a few weeks. On a whim, I uploaded my viral TikToks to Instagram Reels… I gained over 100,000 followers in a month. I now have over 350,000 followers across both platforms,” said McGaugh, amazed and overwhelmed at such growth.

“The most challenging project was flipping a red chicken-themed dresser I found on the side of the road. The process of flipping it was easy; however, the video went viral with more than three million views across TikTok and Instagram. Let’s just say some viewers were not happy I removed the chicken knobs,” McGaugh quipped.

McGaugh feels that classes she took at the Anderson University College of Business have given her valuable experience.

“I used to joke that I didn’t even need a marketing degree for what I do now; however, that’s not the case at all. I use what I learned in business classes to negotiate with brands on deals, list and sell my products and much more,” McGaugh said. “Not a day goes by without me using something I learned at AU.”

“AU was the first college I ever toured… and the last,”  McGaugh said. She knew right away that she wanted to go to AU and set out initially to major in secondary English education. After a trip to Paris with the College of Business during her sophomore year, she fell in love with marketing and switched her major.

McGaugh also remembers the fun she had going to West Fest, homecoming dances, spring flings and a memorable lip-sync battle with her best friend. “Years later I still find the video to watch,” she said.

After graduating from AU, McGaugh worked as a wholesale director, but in three months, she started her own business and became a social media strategist.

“While highly successful, I began to lose interest in social media marketing strategy a few years later,” McGaugh said. “I stopped taking clients when I got pregnant.”

McGaugh never considered herself to be a creative person, but when she had her baby in January 2020, she was looking for something she could do while he was sleeping.

“I went to a thrift store and found a wood bread box for $4. It was painted bright blue. I’d never considered myself artsy or creative, but after lots of Googling and trial-and-error, I finished my breadbox and fell in love,” McGaugh said.

Her advice to anyone interested in flipping furniture is “if you start with a small project, you won’t have a huge startup cost. I’ve acquired all of my tools over about a year, so the cost is nothing compared to the profit I’ve made,” McGaugh said. “I highly recommend a sander, brushes, paint and sealer. Slowly, you can add different grains of sandpaper, spray paint, a dremel tool, heat gun, screwdriver, bits and more."

McGaugh’s creations can be found on Instagram and TikTok by keying in @maggiemcgaugh.