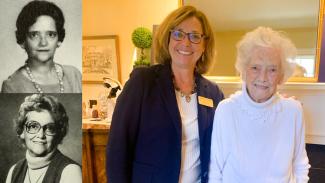 Faye Cowan is pictured with Anderson University Director of Human Resources Amy Porpilia. At left, Cowan in 1965 and 1984. After retiring, Cowan served overseas in the Peace Corps.

At almost 101 years old (her birthday is in November 2022), Faye Cowan continues living out her faith and keeps in touch with her friends at Anderson University. She feels blessed to have taught at Anderson for three decades, then re-enter education through the Peace Corps in the Middle East and Eastern Europe.

Cowan came to Anderson in 1965, at first teaching French. She then taught remedial English until she retired in 1987.

While attending Little River, a country church in Abbeville County, she met Dr. John Edward Rouse, president of Anderson at the time, who was visiting her congregation. He had evidently known that Cowan, being a college graduate and having been the secretary for the president of her own alma mater, had skills that Anderson needed.

Cowan remembers, “He was attracted to my family and met me there that day and told me he’d like for me to come and head his French Department for the next so many years. I said ‘Well, I have to brush up on my French and take some advanced courses to do that,’ and he said that would work. We started the conversation and it went from there.”

Cowan came to Anderson, where she began teaching French. Before long, she knew she needed a change.

“I said, ‘Dr. Rouse, this is not my choice, and I prefer the English Department,’ so I just taught French that first year. It was a junior college when I first went there so we had a lot of the students that came who really needed remedial English, so I taught them remedial English all the way up to honors,” she recalled.

Cowan began her career commuting from her home in rural Abbeville County. She later moved to Anderson. Cowan has fond memories of her Anderson colleagues, their fellowship and family atmosphere, as well as those she befriended at nearby Boulevard Baptist Church.

“I just enjoyed the people. After I started teaching, I had my fourth daughter and would bring her into Boulevard Church and they would care for her for a number of hours,” she said.

After retiring, Cowan moved to Pensacola, Florida, to be with her sister. After her sister died, she looked into working with the Peace Corps.

“They put me through all kinds of testing and writing back and forth. I finally got in, but I think it was just their trying to delay it because of my recent loss,” she said. Her first assignment was in Yemen.

“We went over there, spent about three months in training in their own camp. We weren’t exposed to the outside, because the men had no respect for women and it was just dangerous to be out there, so we stayed within our own little confine,” said Cowan, who was assigned to teach at a university there. “The first gulf war was brewing. We were evacuated before we were ever able to teach there, except for that summer practicum. That was three weeks. My next tour of duty was in Hungary. I enjoyed it there and I taught two years in Hungary. That was ’91-’93.”

When Cowan went to Hungary to teach English, the country was recovering from Soviet rule and, with that came some daunting challenges.

“The Russians had been there up until the year before we came, so they were very limited in any of the college material,” she said. “I don’t know how they could operate as a college, but they had a campus that was divided. Another part of the campus that I was assigned and I was in the office with several other faculty members. I found myself going to Budapest and going down to the offices of the U.S. Embassy and just gathering all kinds of materials for them. Any kinds of books they would ship us in, we would gladly take. So that was really part of my mission as well as the teaching, was to get materials for them.”

These days, Cowan enjoys doing puzzles, Sudoku and reading. She also likes to garden as much as possible, commenting, “I do some gardening but I don’t have very much space to garden. Just a few beans and okra and tomatoes, things like that. I have to have two or three stalks of okra. I just enjoy having fried okra now and then or putting it in food.”

Cowan still lives fairly close to Anderson’s campus and likes to come on campus when she can. She’s impressed by the university’s growth.

“Oh, it’s just amazing. I don’t get out much but I just love to drive by there and look at the buildings. I have stopped by the library a time or two,” she said.

A guiding philosophy of her more than a century of life is, simply put, to follow Jesus.

“He has just led me in so many paths that I did not dream possible and still does, really. It’s just amazing to think the path I take, just open-handed because He leads me,” she said. “I have to say that my Christian faith and walk with Him is what brought me through.”