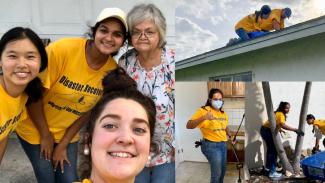 Students Caroline Cotra, left, Anjali Evers, middle, and Emily Prunty, pictured with a resident they were helping, were part of a team doing tearout of drywall in homes and general cleanup of several residences in Cape Coral, one of the communities on Florida’s Gulf Coast impacted by Hurricane Ian.

Hurricane Ian smashed into Florida’s Gulf Coast as a Category 4 storm September 28, the worst such storm to hit the Sunshine State in more than 80 years. Three Anderson University students were among the thousands of volunteers heading south to help Floridians impacted by the disaster.

Prunty has done disaster relief work alongside her father many times for North Carolina Baptists on Mission. She helped with relief efforts in 2021 in Louisiana following the landfall of Hurricane Ida.

At Cape Coral, Prunty, Cotra and Evers tarped roofs, removed drywall, cleared yards of debris and did whatever else was needed.

“One of the houses that we went into… we were doing a tearout where we took the first two feet of the wall out and then when we uncovered it there was a lot of mold growth going on underneath there,” Cotra said. “You can’t live in a house with children with mold growing in your walls. It’s just extremely dangerous.”

Prunty said, "We see the logistic side of the organization of setting up and assisting and then we also see some of the work of governmental agencies. However, you don’t typically see that as much because it’s being handled on the homeowners' side. It is interesting to see homeowners' drive and resilience to return to a new sense of normal. Being able to apply what we’ve learned has been very helpful. We’re able to better understand what everyone has gone through and is continuing to experience."

“Obviously you see things like concepts we learn in the classroom, like command structure, are put into practice like that, but I think most importantly it’s just the servant’s heart and leading from behind that’s demonstrated by faculty and staff within the SPSA,” Cotra said.

Evers, who comes from Florida, knows firsthand the effects of hurricanes. She remembers helping her parents gather needed supplies for hurricane victims in Puerto Rico. Evers said, “The most special part was when we were done with each house, we would go and pray with them and give them a Bible.”

According to Evers, residents were grateful for the outpouring of volunteer help, especially when local roofers and contractors facing overwhelming demand for repair work are unable to help everyone in need.

“I think they're extremely thankful. I was just thankful that I was able to help make a difference in their lives, without them having to pay anything, but just like, see it as like a blessing from God,” Evers said.

Prunty praised Associate Campus Minister Becky Walker of Anderson University Campus Ministries for offering assistance, then partnering with their efforts by donating soap, toothpaste and toothbrushes, shampoo and other hygiene items for those impacted by the storm. Walker noted that Campus Ministries also donated gas money for the trip, and Director of Facilities and Campus Safety Charlie Dickerson assisted with gloves and goggles for them to use.

Details about the Homeland Security and Emergency Management programs can be found at the Anderson University School of Public Service and Administration website.