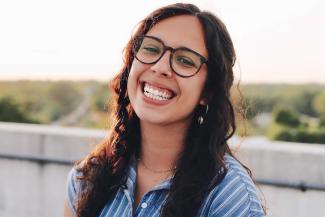 Danielle Rondinelli, a student in the Anderson University College of Business, feels her donation of life-giving cells is a great way of showing Christ’s love to others.

If you had the chance to save a life, would you? A few years ago, Danielle Rondinelli came across a social media post about becoming a bone marrow donor and felt led to respond.

“When I was 18 I signed up for the registry. I didn’t think anything would necessarily come of it. Then about a year after I joined the registry I got an email saying I had been matched to a potential donor,” said Rondinelli, a marketing major and supply chain minor in the College of Business at Anderson University.

When Rondinelli first visited Anderson, traveling from her hometown of Charlotte, North Carolina, she felt a peace in her heart.

“It was truly a God thing, because He put the right people in the right place.”

Rondinelli has been serving in Anderson’s SGA (Student Government Association) as secretary for diversity and inclusion. She feels her work at SGA has been a blessing as she serves students and is gratified by the professional skills she uses daily.

Rondinelli approaches things with a servant’s heart. So when she found out she was a match for a potential donor, she went through the steps toward the donation process. Individuals with various types of bone and blood cancers face an untreatable illness, so bone marrow transplants give them the gift of time.

Rondinelli submitted her DNA sample to the bone marrow registry, run by Be the Match a nonprofit organization, followed by lab work and several doctor visits. In early March, when it was time to donate, she flew to Chicago to the facility where the procedure was performed.

What used to be a relatively painful, invasive procedure has improved over the years. Still, the process for Rondinelli to prepare for her donation was a lengthy one.

“I received injections of a medication over several days that encourages the stem cells to move from the bones where they usually are into the bloodstream,” she said. “That way they can collect all of the stem cells. It took a while. My donation time was from about 11 in the morning until about five in the evening.”

Be the Match walked Rondinelli through the process every step of the way.

“It’s honestly fantastic,” she said. “My dad was able to come with me. We didn’t have to pay for anything; the organization takes care of everything financially.”

“When you’re sitting there and you’re looking at this machine… I was looking at the bag of my cells. It’s just kind of a moment where that pain, it just doesn’t become important anymore, because you’re able to see what a blessing it is that you’re able to do something,” she said.

Rondinelli is currently off campus completing a co-op at BMW Manufacturing Company’s Plant Spartanburg, where she assists the training department in coordinating approximately 120 co-ops and interns. She appreciates the opportunity to take time off for this lifesaving procedure and looks forward to connecting with the recipient of her cells.

“We have to have anonymous contact for about a year,” she said. “I’m really looking forward to being able to just communicate with that person and say ‘I know that I don’t know you, but I’m fighting for you, I’m here for you, I’m in your corner,’ and just letting people know they’re supported, even if they don’t know by who. It’s honestly the best feeling.”