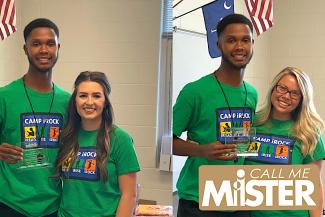 Kamin Bond, a student in the Anderson University College of Education involved in the university’s Call Me MiSTER program, received a Distinguished Service Award recently at the conclusion of Camp iRock.

Kevin Williams, Site Coordinator for Call Me MiSTER at Anderson University, says that the Distinguished Service Award is  presented to the top performing MiSTER at each site. Bond interned at Camp iRock’s site at Liberty Primary School in Liberty, South Carolina.

“MiSTER Bond was literally brought to tears when—to his obvious surprise—the award was given to him,” Williams said. “I also spoke with the Program Manager for Call Me MiSTER at Clemson who sang MiSTER Bond’s praises for the service he rendered to the students of Camp iRock.”

When they were calling out the awards, Bond says he didn’t see it coming.

“I’m sitting there thinking it’s over and then they walk out and say we have one more award,” Bond said. “I was just caught off guard, super emotional; it was a pretty nice moment.”

Bond knew since eighth-grade he was going into education. During his high school years, his work always seemed to revolve around kids,  whether coaching or counseling.

Since entering Call Me MiSTER at Anderson University, Bond has sensed a brotherhood and a support system like nothing else he has ever experienced.

“It’s just genuine. You don’t find it very common to have male educators who are like minded and who all have the same goals as you,” Bond said. “One of the big things we talk about is that everyone can be a teacher, but we see ourselves as educators… being role models, being servant leaders, being those who are willing to go the extra mile.”

Diversity and Inclusion College of Education