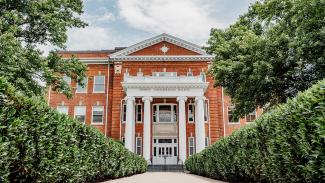 As Anderson University enjoys another record-breaking enrollment of nearly 4,000 students, its campus community has another reason to celebrate: it is once again ranked among the best regional universities in the South, according to the annual U.S. News & World Report “Best Colleges” rankings released today.

Anderson University ranks #44 among regional universities in the South, and was named to the publication’s “Best Undergraduate Teaching” (#15) and “Best Value” (#29) lists for 2022, along with being noted for excellence in a student’s “First Year Experience.”

“Anderson University is enjoying the most prosperous, successful season in its 110-year history, and I’m proud of all that our faculty, staff and students have accomplished in helping get us where we are today,” said President Evans P. Whitaker, Ph.D.

In addition to the latest U.S. News & World Reportrankings, Anderson University is ranked #26 in the country among all universities (public and private) for Student Engagement by the Wall Street Journal/Times Higher Education. Most recently, the University was named to the honor roll of the prestigious Great Colleges to Work For program—it is one of just two universities in South Carolina named to that list—and was named the #5 Top Workplace among large companies throughout South Carolina by the Greenville Business Magazine.