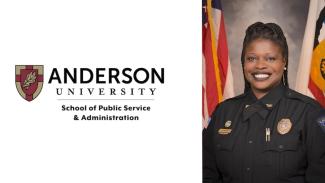 Chrissie Latimore, a graduate of the Command College of South Carolina at Anderson University, was nominated to serve as a U.S. Marshall.

Chrissie Latimore, a graduate of the Command College of South Carolina in the School of Public Service and Administration, was named by President Joe Biden as a nominee for United States Marshall for the District of South Carolina.

Latimore has served as chief of police for the Laurens Police Department since 2018. She previously served as assistant chief of police of the Laurens Police Department from 2014 to 2018, and in various other roles with the Department from 1999 to 2013. She was a special agent for the South Carolina Law Enforcement Division from 2013 to 2014. Chief Latimore received her M.S. from Anderson University in 2014, graduating from the fourth cohort of the Command College of South Carolina in the School of Public Service and Administration at Anderson University. She also received her B.S. from Lander University in 2011, and her A.S. from Piedmont Technical College in 2007. Latimore is a veteran of the United States Army and Army Reserve.

The nomination is subject to confirmation by the United States Senate.