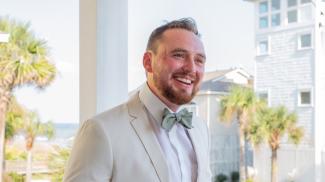 College of Business graduate Tinsley enthusiastically embraces each day and each project with a different perspective from most of us, due in no small part to a pivotal life event.

Ben Tinsley gets up in the morning grateful for a new day and new opportunities.

Tinsley, a 2018 graduate of the Anderson University College of Business, and his wife Lauren, founded Six and Twenty Films, a media production company that produces many types of videos for a variety of clients.

Getting a GoPro video camera as a teenager helped spark Tinsley’s interest in videography. Some time later, he met Lauren, who was into photography. Together they would go on “photography dates” and work together on media production projects.

Tinsley enthusiastically embraces each day and each project with a different perspective from most of us, due in no small part to a pivotal event in his life.

At age 15, Tinsley was riding in a van leaving a camp near Travelers Rest, South Carolina, when it went off the road and he was ejected. Another passenger, badly hurt as well, was still able to reach Tinsley, whom he found face down in a creek.

“I had severe head trauma, tore my ACL, MCL, PCL, tore my meniscus all out of my left knee and a bunch of cartilage. I had three of my four tendons that had structural damage to them. I’m still missing half of my meniscus, a lot of cartilage is still gone; they couldn’t replace that at the time. I broke my tailbone, both wrists, broke my leg, had a break in my arm. I had a gaping hole in my cheek and was scalped. I lost half of my blood,” said Tinsley, adding that doctors told him his injuries were the worst head trauma they’d seen without severe brain damage.

Tinsley went through more than 14 hours of surgery, including extensive plastic surgery on his face and surgery to reconstruct his leg.

“I remember my dad coming up to me and saying ‘Ben, we don’t know the extent…’ because I had doctors briefly mention ‘I don’t know  if you can run the same way ever again after we fix your knee. And don’t know if you’d be able to walk without a limp. Our goal is to get you back to where you’re walking fine, but running, we don’t know.’ After nearly two years of physical therapy, I ended up coming back and being able to play soccer in high school and intramurals at Anderson. I can even do a backflip now,” Tinsley says, giving God the glory for the extent of his recovery.

Tinsley also recalls how another passenger in the van, badly burned, gave his life to Christ while stuck in the wreckage.

Seeing his brother’s college experiences at Anderson University, Tinsley felt that was where he needed to be as well.

“When he went there, the education that he got and the type of friendships, how much I saw him grow as a person, I figured that if I could grow a little bit in that direction, it would be worth going there. Sure enough, it was a great experience for me,” Tinsley said.

By the time he was a college student, Tinsley was already something of an entrepreneur, having learned to make money fixing up cars and remodeling homes. At Anderson, he enjoyed being able to share his ideas openly with his professors, who in turn helped him learn more about marketing and operating a business, including the finer details of pricing projects.

“I started learning about the marketing principles and the salesmanship that goes into it,” Tinsley said, adding that he gained inspiration to pursue a media-type business as well as soft skills to more effectively work with his clients.

“The fact that I could go and get breakfast with (professor) Joe Spencer and just have a one-on-one time with him… I don’t think I would get that at a different college,” Tinsley said. “I knew I wanted to be in marketing because I like talking to people.”

While at Anderson University, Tinsley also landed an internship aboard a 51-foot Morgan Ketch, sailing in the Bahamas—a combination of being a deckhand and producing videos for the company that operated charter cruises.

Helping others tell their story

While a mainstay of Six and Twenty Films is weddings, the Tinsleys produce videos for a variety of corporations and organizations, locally and as far away as Germany. Tinsley loves talking to people and producing videos that tell a story.

Each project is unique in some way, and things don’t always go according to plan. While shooting an axe throwing project, to get an up-close shot, they attached a GoPro camera to the bullseye of a target.

“This girl threw this axe and we were like ‘she’ll never hit the bullseye.’ Thank the Lord we didn’t put one of our big cinema cameras up. It blew up. It caught fire. We had to throw it in an ash bucket for cigarettes and pour water on it to put it out.”

But Tinsley’s all about going out on a limb and trying something different to achieve a great video.

“I don’t think everything’s about making a dollar, I think it’s about interactions with each other and the friendships you can make. If you can do that through business and make some money to put food on your table or pay your mortgage, great, but life’s not all about that.”

Marketing majors in the Anderson University College of Business acquire the experience to become a marketing professional – as part of a large marketing and advertising firm, as a media buyer for a boutique marketing agency, a key player in a marketing department—or even an entrepreneur. Details can be found online.