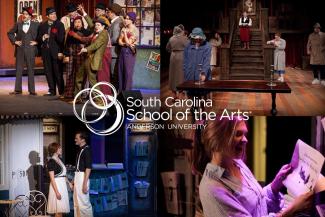 The Kennedy Center American College Theatre Festival (KCACTF) nominated several Theatre and Dance students for awards and a chance to compete in Washington, D.C. in 2022.

According to Dr. David Sollish, chair of the Anderson University Department of Theatre and Dance, a KCACTF respondent came to view the Theatre and Dance productions “Lettice and Lovage” and “Guys and Dolls” during the Fall 2021 Semester and nominate students. Those students then can go to a regional Kennedy Center festival to compete, and if they win the region, they head to a national competition in Washington, D.C., with the potential of winning a scholarship.

The following students were nominated:

Started in 1969 by Kennedy Center founding chairman, Roger L. Stevens, the Kennedy Center American College Theater is a national theater program involving 18,000 students from colleges and universities nationwide which has served as a catalyst in improving the quality of college theater in the United States. The KCACTF has grown into a network of more than 600 academic institutions throughout the country, where theater departments and student artists showcase their work and receive outside assessment by KCACTF respondents.