The Audience Experience Starts Well Before the Curtains Rise 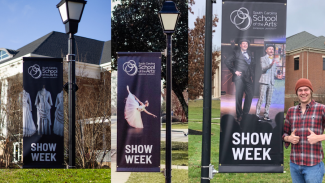 A South Carolina School of the Arts Student has been taking an innovative approach to promotion.

A senior in the Department of Theatre and Dance of the South Carolina School of the Arts at Anderson University is dedicated to maximizing the audience experience.

John Verzwyvelt knows about creating excitement for musicals, plays and other events, having been involved in theatre throughout high school and college. He also made community connections, creating a fundraising campaign for a Louisiana animal shelter. He’s also used his theatre and improv skills to highlight the importance of honing communication skills for business students.

When Verzwyvelt transferred to Anderson University his sophomore year, he focused energy on marketing for the South Carolina School of the Arts. During his junior year, he helped Dr. David Sollish, chair of the Department of Theatre and Dance, create a marketing team. The team is now led by Dr. Sollish and two part-time staff members.

“I am so excited that I was able to create a class that will continue to help our students get more jobs in theatre in the future,” Verzwyvelt said.

Knowing that the audience experience begins long before they take their seat in the theater, the marketing team worked to create interest among people not tuned into the theatre world. One way was to come up with Show Week banners—a tangible, visible representation of details the Department of Theatre and Dance puts into each production.

“When you look at our Show Week banners, you see costumes our costumers did, but you’ll also notice there aren’t any actors in them, and that’s on purpose, so we could bring a major focus to the very hard work that our designers put in.”

For his senior project, Verzwyvelt launched a fundraiser to add special lighting and a season banner at the entrance to the Rainey Fine Arts Center and the Belk Theater Plaza. He also envisions a large lobby monitor to show videos to further build audience anticipation for the production waiting for them inside the theater. The audience then takes their seat in the improved, comfortable seating inside.

“We want people to see the banners and say ‘wow, these people really care about theatre.’ Especially prospective students saying ‘I could see myself doing this.’ Go into our lobby. We have this huge lobby display with all the stuff we did to work on the show, we have videos playing about the show, we have videos about the students performing the show. The seats become the destination that is the most important part of the project, because they transport you into the show,” Verzwyvelt said.

The fundraiser is a collaboration between the South Carolina School of the Arts, Office of Development and Office of Administration and Brand.

“Anderson University has just given me so much,” Verzwyvelt said. “I just wanted to give back in some way, so I’m doing a development project with the School of the Arts to increase the Anderson show experience.”

Verzwyvelt is especially grateful to South Carolina School of the Arts Dean Dr. David Larson for the success of his senior project, adding that the project would never have happened without his support.

Of course, Verzwyvelt still enjoys performing. He has been in several South Carolina School of the Arts productions, including “Curtains,” “The Women of Lockerbie,” and this semester’s production of “Bright Star.”

Verzwyvelt plans an internship with the historic MUNY Theater in St. Louis, Missouri, this summer, then plans to pursue advanced study in advertising.

“John is a driven, thoughtful and passionate young man who offers a friendly face to everyone he meets. He is always looking for opportunities to further the impact of our Department of Theatre and Dance, increase his knowledge and skills, and well as develop relationships with everyone he meets,” said Rebekah Miller, manager of SCSA Digital Media and production manager for Commercial Music. “He not only pursues excellence in his theater craft, but also in marketing, promotion, and graphic design. Not only does he push for quality in his work, but he also sees the joyful and fun side of life.”