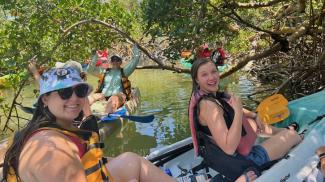 A team of students and Biology Professor Dr. Joni Criswell traveled to the Florida Keys to study a diverse subtropical ecosystem.

A group of students from the Anderson University College of Arts and Sciences traveled to one of the most diverse ecosystems in the United States for studying subtropical environments.

Twenty-one students from the Subtropical Ecosystems class, along with Dr. Joni Criswell, associate professor of biology, and three chaperones were at Pigeon Key Island, Florida, May 5-11 to gain a better insight into the biodiversity among the subtropical regions of the United States. Another goal of the trip was to better educate students about conservation efforts and the effect human pollution is causing on ecosystems such as mangrove forests.

“I feel this trip is extremely beneficial to any student looking into ecology or how to better our planet through natural resources,” said Brianna Rao, a rising junior biology major from Rock Hill, South Carolina.

According to Dr. Criswell, the Florida Keys closely resembles tropical areas of other countries she’s visited. She says that observing subtropical and tropical ecosystems is beneficial, because such areas contain upwards of about 90 percent of diversity.

“Even though we live in a state that has a fair amount of biodiversity with the coast, the Upstate and the mountains… subtropical and tropical regions house most of the world’s biodiversity. You don’t get an appreciation until you’re up close and have hands-on experience with it and are not seeing in a zoo setting. It’s one thing to appreciate something behind a fence, another thing to actually see it in the wild and have an up-close encounter with a species,” Dr. Criswell said.

Pigeon Key is a five-acre island with a marine science center located along the old Seven Mile Bridge. The students also learned the history of Pigeon Key, which was originally the location for a work camp connected with construction of the Florida East Coast Railway in the early twentieth century.

“We were on this island to learn more about conservation efforts and also to physically see what we had learned about in class, like coral reef ecosystems and how they were affecting marsh ecosystems and mangrove ecosystems—mostly just to give us a better view of how our oceans work and our ocean life is built upon these ecosystems that are subtropical and how we’re dependent on them for the future of the world,” Rao said. “We got to explore a lot. We got to snorkel. We got to see some cool stuff along the islands: eels, lobsters, rays, dolphins, starfish—all the sea life you could possibly imagine. We got to do a lot of things on the island you wouldn’t have gotten to do as a visitor. Staying the night we got to do tide pooling and look at smaller creatures we had never seen in real life because we weren’t used to that environment, being from South Carolina, so it was really cool to be able to see those creatures we learned about in class.

The students also saw firsthand just how vulnerable such an ecosystem can be, picking up items that litter the area.

“We found pieces of wire from fishing lines, we found netting… pieces of wood, pieces of beer cans, alcohol bottles, pieces of cigarettes that had washed up, and a bunch of lumber and tires that just didn’t need to be there,” Rao said. “It opened our eyes to a lot of conservation efforts and the reasoning behind so much of a movement in the world for conserving our coral reef ecosystems, conserving of mangrove ecosystems… I think for me it also opened my eyes to more career opportunities in the future, such as moving toward careers in conservation, ecology, then have an appreciation for what these people did and how they’re trying to save the world. It also gave me more of a love for the major that I chose because I got to see these animals from behind the fence, but I also got to see them in front of the fence, to be able to hold them, appreciate them and understand how they work.”

Since returning from the trip, Rao and her classmates have been texting each other about their hopes to return to the area someday. 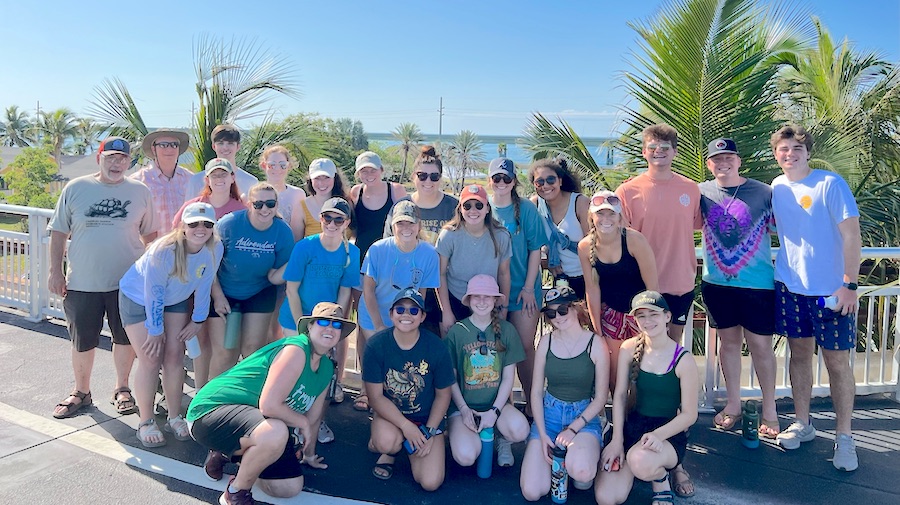