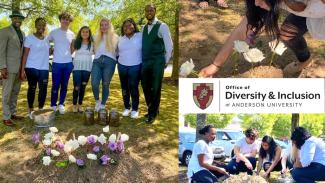 The Anderson University Office of Diversity and Inclusion and the Anderson Area Remembrance and Reconciliation Initiative recognized the life of Elbert Harris April 22 at a moving ceremony in downtown Anderson.

On May 20, 1898, as police were transporting Harris to the Anderson County Jail, a mob took him and beat him severely. Harris died later due to the negligence of the officer(s) at the jail not getting him the proper care needed when he returned to their custody. In remembrance of this tragic event, a group of Anderson University students collected soil from the site of the incident and placed them in jars with Harris’ name. Purple and white flowers were placed on the soil in memory of Harris.

Harris was one of five lynching victims the Anderson Area Remembrance and Reconciliation Initiative remembered. The lynchings took place between 1894 and 1911.