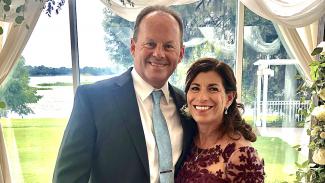 Because of a sports accident when he was younger, former Anderson University student Stephen Huff, pictured with his wife Maria, took advantage of a NASA program that launched his career.

As network administrator for NASA Engineering Laboratories, Stephen Huff is involved with the technological tools essential to its people and research.

One aspect of Huff’s job is getting new NASA employees set up with office space, telephone connectivity and computer systems; he also serves as the property custodian for equipment in the engineering laboratories and numerous work sites at NASA’s Kennedy Space Center in Florida.

“Whenever a payload comes in to be processed or a shuttle load is being stacked, you have hundreds of different processing operations going on simultaneously. Whenever one of those things has an issue — mechanical, electrical, chemical issue — they will bring it to our labs and we will do a failure analysis on it. They used to call it the 'Malfunction Junction,' where we do failure analysis. I’ve been in failure analysis for 30 years,” Huff said.

As NASA moves into a new era of supporting private endeavors such as SpaceX and Blue Origin, Huff, who attended Anderson University from 1983-1985, works with the labs as they conduct the analysis crucial to their safety and success. He’s also connected with research on a new space launch system (SLS) that is part of a future international space station that may one day orbit the moon and serve as a docking point for projects taking place on the lunar surface.

Whether it’s researching a compact water purifier for the International Space Station or researching the effects of micrometeorites on the space station’s windows, Huff ensures that equipment in the labs is up to the task.

To understand how Huff got to NASA in the first place, it’s essential to go back to a particular soccer game at Anderson University. Then-coach Rick Wright recruited Huff from Wade Hampton High School in Greenville, S.C., to play for the Trojans. Huff was also studying for a real estate career, taking religion courses and any other course he thought would help him become successful in life.

During a soccer playoff, Huff collided head-to-head with a fullback, hitting him so hard that he began to experience seizures.

“I was at home one evening and had a seizure,” said Huff, who was trying to hide his seizures from family at the time. “My brother saw it and got mom and we stopped everything. I started seeing a neurologist to try to get the seizures under control, because at that point they were totally out of control. These were grand mals, which means I was unconscious for the majority of the time I was having a seizure.” Huff compared his experiences to someone having their hand on a railroad track and feeling the train coming. He could feel it coming but didn’t know when it would show up. Looking back, Huff is grateful for those at AU who helped him through those experiences.

When his mother passed away and his father was unable to help him at home, Huff moved to his sister’s house in Florida.

“I lived with my sister, Beth in Titusville and worked at Disney World, in Orlando” said Huff, adding that he met his wife Maria at Disney World’s confectionery shop. They have three daughters, now grown. Huff’s sister had a friend who worked for NASA in human resources who was able to get him a job under a program the agency had for hiring people with disabilities.

“My first six months I worked in the computer resources area — that’s basically where I cut my teeth,” said Huff, who was introduced to large Intergraph computers that engineers used in design work. “I was involved in setting the Intergraph machines up, updating the software and making sure they ran the way they were supposed to.”

In Florida, Huff was also starting to get help with his continuing seizures. He saw different neurologists and was placed on several “trial and error” medications, hoping to get the seizures under control. He ultimately sought out the doctors of University of Florida’s Shands Hospital in Gainesville, who believed they could find a remedy for his seizures.

“I had maybe 10 doctors who were working on my case alone — that’s what Shands is all about — focusing on the cases where they can actually make some difference. The testing went on for about six months, then I had the surgery. The surgeon was able to remove the scar tissue from my left temporal lobe and I was then able to return to and maintain a regular life,” Huff said, adding that he has been seizure free since 2005.

“I’m very grateful to the Lord for putting me in the position he put me into and helping me through the times I needed it,” Huff said.

Huff continues to be involved in sports and has coached all three of his daughters in soccer. When he’s not working at the Kennedy Space Center, he referees high school soccer, volleyball and lacrosse and has served as regional vice president for the Florida Youth Soccer Association in region B, covering the Florida coast from Jacksonville to Dade County and inland to Orlando.

Huff feels blessed with the opportunities NASA has given him. Like a lot of Americans who grew up in the 1960s and 70s, he was fascinated with the NASA space program. He remembers seeing the Apollo moon landing on a large floor-model black-and-white television and jokes that he was the remote control for his dad, changing the channels with pliers and adjusting the rabbit ears antenna for focus.

His fascination continues as NASA looks to future projects, many of which he has a hand in developing.