Quick Thinking, AU Training Helped This Student Save a Life 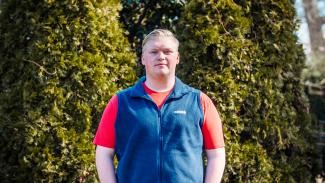 When Anderson University student Steitler Buisch started his new job as a security guard, he thought he knew what he was getting into: A job that would better prepare him for his career in criminal justice.

But he had no idea that on his first weekend shift, someone’s life would be placed in his hands.

“As my coworker walked away, she turned back around and said, ‘If I don’t come back, come check on me,’” Buisch said. “The next time I saw her, she was unconscious.”

Buisch was working the night shift at a manufacturing plant with his coworker for what was shaping up to be an uneventful evening. His coworker, 23, left on a break to get a candy bar, complaining that her blood sugar was dropping.

“I was sitting alone in the security office reading my book when I heard the door open behind me,” Buisch said. “I turned around just as she fell face-first into the office chair beside me. I jumped up to keep her from falling on the floor, but when I got to her, she was already dead. No breathing. No pulse. Nothing.”

Immediately after dialing 911, Buisch began CPR chest compressions on his coworker. Upon hearing the commotion down the hall, another employee ran into the room, and Buisch sent him to retrieve an AED.

“Looking back on it, I don’t know how I kept my cool,” Buisch said. “I think the steps I took were calculated and calm, but only because of my training from the CERT class. I just kept thinking ‘I’ve got somebody here who needs my help, and my professors taught me how. I’ve got to help her.’”

After about 50 chest compressions, Buisch’s coworker finally revived and started breathing. Relieved, Buisch said he thought that he was in the clear, but he was sorely mistaken.

Immediately after waking up, his coworker went into a seizure. Thinking back to his training in his Community Emergency Response Team (CERT) class, he turned her onto her side into the recovery position.

“In between the time that she started breathing and the paramedics showed up, she had three more seizures,” Buisch said. “But I was able to keep her awake and breathing.”

“In 37 years as an EMT and paramedic, I have run hundreds of cardiac arrests like this one, but I have seen only 12 survivors. There are very few saves without the proper use of CPR or an AED,” Murphy said. “So this is significant, for Steitler and for his colleague. She was very fortunate to have Steitler there looking out for her, and so effectively using the tools that he learned within the CERT class.”

Anderson University’s CERT class teaches students how to respond to mass casualty and trauma situations, but also how to effectively perform CPR and basic first aid on an individual level. Buisch said that without this class, things might have turned out very differently.

“I’m glad that I was the one working that night, because somebody else might not have had the training to save her life,” Buisch said. “But thanks to Dr. Murphy and his training through the CERT class, I get to see my coworker at work, walking around and doing okay. That makes me happy.”

“I think that Steitler's actions in this incident represent the public service professional we hope to develop in our programs in the School of Public Service and Administration and at Anderson University,” said Dr. Chuck Williamson, dean of the School of Public Service and Administration. “Steitler solved a critical problem as an employee in saving the life of his co-worker. I commend him for his quick thinking, application of skills learned in our CERT course and compassion for the lives of those around him.”

Dr. Murphy sees this accomplishment as a confidence booster for Buisch, but also as an encouragement to others, both in the School of Public Service and Administration and Anderson University, as a whole.

“As other’s hear Steitler’s testimony, I hope it will increase their desire to learn more, to better prepare themselves, and to be the servant leaders we are all called to be,” Murphy said. “We are called to be our brothers’ and sisters’ keepers. By looking out for each other, we are also serving our Heavenly Father.”