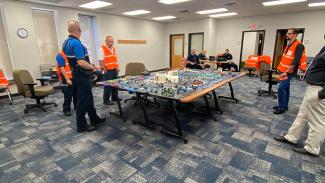 The School of Public Service and Administration brings first responders together, helping agencies prepare for a real emergency.

When disaster hits, an effective coordinated response is essential. That’s the end goal of a functional exercise at the Anderson University School of Public Service and Administration.

The School of Public Service and Administration joined with AnMed Health and their emergency response partners to go through the many moving parts. Medshore Ambulance Service, the Anderson County Sheriff’s Office Emergency Management Division, the Anderson Police Department and the Anderson Fire Department also participated.

The scenario for this real-time exercise was multiple tornadoes spawned by a severe storm front moving through the Anderson area, leaving extensive damage and casualties in its wake. That may sound severe, but it’s those worst-case scenarios that test the mettle of emergency responders. And, according to Dr. Howard Murphy, associate professor and coordinator of Homeland Security and Emergency services degree programs, exercising worst-case scenarios effectively tests the plans, procedures and capabilities of responders, allowing them to identify gaps and shortfalls in their response operations.

At the center of the exercise is a large tabletop scale model of the AnMed North Campus and other parts of the community. Also used are scale model fire apparatus, ambulances and other vehicles. Participants, who represent AnMed and other emergency response agencies, are together physically in the room, but only communicate with each other via walkie-talkies. They also use radios to communicate with the respective AnMed and county emergency operations centers located in other areas of the building, just the way they would in an actual emergency.

Todd O’Quinn, director of safety and security at AnMed Health, said the exercise proved to be “extremely beneficial” for his team as they collaborated with partner agencies.

“Anderson University continues to be an ally and tremendous community partner, willing to lend support and resources for this well-planned and highly effective functional exercise,” O’Quinn said.

Joshua Shore, general manager of Medshore Ambulance Service, appreciates the effort of Murphy and the School of Public Service and Administration in devoting 100-plus hours to preparing this exercise. He believes such an exercise is invaluable for his company and all stakeholders involved when a disaster hits. The exercise is also essential to maintaining state accreditation, according to Shore.

“Each stakeholder entity that was there during the wrap-up, we figured out something, a gap or vulnerability … we make sure we tackle this and address it now so it doesn’t happen in real life,” Shore said. “It was extremely beneficial for us to work on our gaps.”

The exercise tests effective communication between health care and emergency responders, carrying out established procedures in a coordinated response.

The exercise took place at the School of Public Service and Administration facility in downtown Anderson, where the county’s emergency response office is located also.