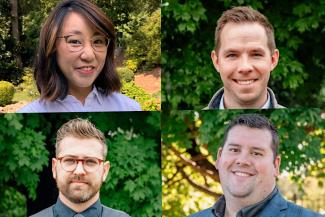 The South Carolina School of the Arts at Anderson University welcomed three new full-time faculty in its Art and Design Department and one in the Music Department.

Lin joined SCSA in January as a visiting professor and was selected for a full-time position. She came to Anderson this past December from New York City, where she was a research resident at New York University while working on her master’s degree there. She came to Anderson University, first as a visiting professor, then became a member of the full time faculty in fall 2021. Lin received her master’s degree at NYU in Interactive Telecommunications. She also has an undergraduate degree in Graphic Design and Illustration from Rhode Island School of Design. Her professional experience includes working as an exhibit and graphic designer at The Museum of Us, an anthropology museum in San Diego, California. She was also a designer at Good Magazine and Bruce Mau Design, both in Los Angeles. Lin is interested in the interrelationship between technology and art. She lives in Greenville with her husband, who is a physics professor at Clemson University. They both attend Peace Church in Clemson.

Anspach completed his MFA in Graphic Design from Vermont College of Fine Arts and has held a variety of teaching positions over the past five years. He is a creative director, digital designer and brand strategist with a focus on user experience, user interface and brand design. He has led a professional practice for more than a decade and worked on national and international award-winning projects. Much of his work deals with tourism, economic development and community-based entities. This past June, he married his wife, Kylee, who is a high school art teacher and shares a mutual interest in missions work, having made 13 trips to Kenya over the past six years. Anspach comes from a small non-denominational church in Indiana, primarily made up of college students, and has served as an elder, worship leader, and sound tech.

Nelsen assumes the role of Associate Professor of Art and Design. He received his BS in Photography from Indiana Wesleyan University and his MFA in Visual Art from Lesley University. He has worked as a freelance commercial photographer, editor, and workflow consultant, and also has ten years of teaching experience in higher education. He is a member of Society of Photographic Education (SPE), College Art Association of America (CAA), Christians in Visual Arts (CIVA), and American Photographer’s Association (APA). Most of his work is centered around ideas of faith and infinity, with a special interest in the way that art can help theorize about string theory, quantum mechanics and field theory. Nelsen has been married to his wife, Laura, for 11 years and they have three children. Their former church service has included teaching 2-3 year olds, serving as youth group leaders, and participating in family small groups.

The South Carolina School of the Arts at Anderson University trains professional visual, musical and theatrical artists who are serious about both their art and their Christian faith. Staffed by highly trained and world-class artists, musicians, actors, dancers, theatrical designers and scholars, we mentor students to develop their artistry to its fullest potential so they may thrive professionally and serve others through the arts.