South Carolina School of the Arts Grad Taking On Broadway 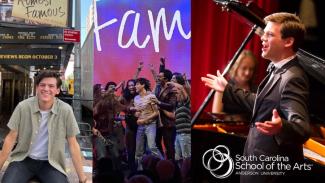 Being on Broadway is a childhood dream come true for Andrew Poston, a music graduate of the South Carolina School of the Arts at Anderson University. At right, Poston performing as an AU student.

Andrew Poston, a graduate of the South Carolina School of the Arts at Anderson University, has just checked something major off his bucket list.

Poston is in a brand new Broadway musical that debuted Oct. 3. He’s an understudy to the lead character in "Almost Famous,” which tells the story of 15-year-old aspiring rock journalist William Miller, who is hired by Rolling Stone magazine to write an article about an up-and-coming band.

Being on Broadway is a childhood dream come true for Poston, who grew up in rural Pamplico, South Carolina and graduated in 2018 from Anderson University with his commercial music degree.

Poston grew up doing community theatre in South Carolina’s Pee Dee region. Since graduating from Anderson he has made a profession of acting, performing roles in many regional theatre productions, including “Godspell,” “Newsies,” “Hello, Dolly!,” and “Shrek, the Musical.”

"I knew the moment I first heard Andrew sing that he had a special gift and could have a successful singing career if he wanted it. Not only does he have a beautiful voice, but he is such an honest, authentic performer," said Welborn, who was his voice professor while he was at Anderson.

Poston kept auditioning for different Broadway projects and different tours. His audition for “Almost Famous” was to happen right before the COVID-19 pandemic shut things down. During the pandemic, Poston moved to Nashville for a couple of months to record some of his songs in an EP. Poston was also interested in plugging into ministry and found an opportunity to lead worship at Friendship Church in Lugoff.

“I had worked with the music director of ‘Almost Famous’ right before the pandemic in a production of ‘Godspell’ and then in July my agents reached out to see if I was still interested in the project,” Poston recalls. “I said ‘yes’ and things escalated from there.”

Poston’s high school voice teacher was friends with Professor Deirdre Welborn of the South Carolina School of the Arts at Anderson University. Poston majored in Commercial Music and is a founding member of AUthenticity, an ensemble of Commercial Music majors. He also has happy memories of being part of Christmas First Night and the President’s Gala. Most cherished are friendships made while playing with AUthenticity and other times of making music with his classmates.

While Poston feels fortunate for this opportunity in the Big Apple, he also enjoys leading worship regularly at his church in South Carolina, as well as other churches along the East Coast.

“I’m incredibly grateful to check this opportunity off of my bucket list. Being on Broadway has been a childhood dream of mine forever, for as long as I can remember, and this is completely a blessing that I’m able to do this and able to be a part of this journey and be a part of this production process,” Poston said, “Not many people get to say they’ve been on Broadway and I am pinching myself every single day when I’m in that theater.”