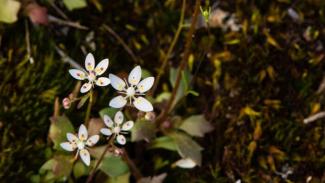 ‘Shealy’s Saxifrage’ Only Known to Exist in Upstate South Carolina

Anderson University is celebrating the discovery of a rare plant variety by College of Arts and Sciences Professor Dr. Laary Cushman.

Dr. Cushman, who teaches biology at AU, has been studying a rare plant species growing on a granite outcrop at Nine Times Preserve in Northern Pickens County that’s believed to be found nowhere else.

The plant is a saxifrage, a type of flowering plant that is considered a relic from the last ice age, when more of a tundra type of habitat existed in Upstate South Carolina, Dr. Cushman said. Similar plant populations are found in higher elevations of the southern Appalachians, but this particular plant is unique because it’s in a relatively low elevation. The findings of Dr. Cushman, along with colleagues Dr. Patrick McMillan and Dr. Vincent Richards, both professors at Clemson University, are published in the journal Phytotaxa.

The plant has been named Shealy’s Saxifrage in honor of Dr. Harry E. Shealy Jr., professor emeritus at USC-Aiken, known for his contributions to botany and also an adviser of Dr. Cushman in his master’s and doctoral work on speciation. It was Dr. McMillan who called on Dr. Cushman to perform a species content study for the plant, which blooms from late winter to early spring.

“What’s neat is that in South Carolina you can see remnants of past environments,” Dr. Cushman said. “The initial thought of this Nine Times population is that it was widespread throughout this entire area, but as the climate changed you start to see warmer vegetation creep in and the colder vegetation just migrated to higher elevations. They became disjunct (trapped) from other major populations.”

The Nature Conservancy owns and manages Nine Times Preserve, which lies at the intersection of the Southern Blue Ridge Mountains and the piedmont region of South Carolina.