Two new dance studios are among improvements benefiting students in South Carolina School of the Arts at Anderson University.

The South Carolina School of the Arts at Anderson University is growing. With that growth comes exciting new facilities.

The Theatre and Dance program has moved dance classes from a rented space downtown to its own home on campus. This move comes as the number of majors has grown, particularly for the new B.A. in Dance degree, now in its third year. According to Terrie Poore, assistant professor of dance, since the degree launched, enrollment has significantly increased, underscoring the need for a spacious facility on campus.

“This puts us all in one location and it helps the students to not have to travel; it cuts down on transit for the students and it’s safer,” Poore said of the new facilities located on the Athletic Campus. “It gives us an actual presence on our own campus and an actual facility to call our own—our home.”

Poore added that the new facility consists of two studios with built-in sound and video systems. Multiple classes can meet at the same time for the growing number of Theatre and Dance students. Also, the size of each studio’s dance floor is slightly larger than the stage in Henderson Auditorium at the Rainey Fine Arts Center—an advantage when rehearsing for productions. The studios double as rehearsal space, and Bluetooth connectivity lets students connect their own devices to the sound system. Adjacent to the studios are changing facilities and offices for dance faculty.

“There are over 100 students that come through these doors, so having additional space and space that’s so large and nice is just a huge asset to us and I think it’s going to take our program to another level,” Poore said. “The students are thrilled. It really just gives the students a sense of ownership to their major. It’s been great for them to see the university investing in them as students in this major.”

Programs in Commercial Music and Worship Leadership have doubled over the past five years, leading to installation of new technology, including full video integration and a Dante (Digital Audio Network Through Ethernet) network in the Music Media Studios at the South Carolina School of the Arts. Improvements to the Music Media Studios were possible through a combination of funding sources, including A-Day funds, funds already raised or allocated through the Johnny Mann Center for Commercial Music, Friends of Music, Senior Follies fund and funds provided by the AU Facilities Department for classroom upgrades under the leadership of Charlie Dickerson, executive director of facilities and Campus Safety and David Carter. 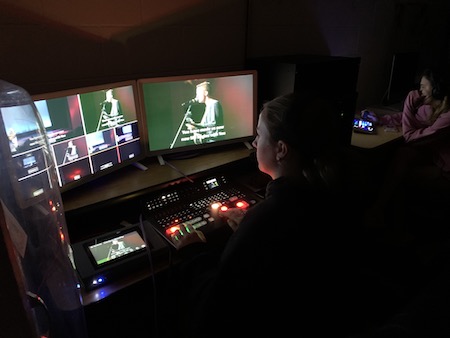 “Everything that happens in Henderson Auditorium and Daniel and The Johnny Mann Center for Commercial Music—several places are hubbed here,” said Joe Wehunt, assistant professor of music and worship leadership. Wehunt added that Dante will let them add audio, mixed in the studio, to video productions. In 2020, when chapels moved online as a response to the COVID-19 pandemic, SCSA invested in five new Black Magic 4K video cameras in Henderson Auditorium.

Dr. Dave Perry, chair of the Music Department, sees extensive benefits to all music students, who can record their performances as part of their professional portfolios.

“The higher level of training will benefit the Commercial Music students and Worship Leadership students probably the most, because of the emphasis on technology,” Dr. Perry said.

Wehunt sees these updates benefiting all music majors, including those who will train future musicians in a school setting or become a part of a church’s media ministry.

“Since high school band, orchestra and choral programs are making efforts to include more commercial music students like singers-songwriters, rhythm section players and sound engineers, our Music Ed students are becoming well-equipped for the challenge with the addition of our new recording facilities,” Wehunt said. “Our Commercial Music and Worship Leadership programs have grown over the past five years. Moving to a professional recording studio situation is a natural progression for our growing departments.”

The South Carolina School of the Arts at Anderson University trains professional visual, musical and theatrical artists who are serious about both their art and their Christian faith. Staffed by highly trained and world-class artists, musicians, actors, dancers, theatrical designers and scholars, we mentor students to develop their artistry to its fullest potential so they may thrive professionally and serve others through the arts.