The Show Must Go On: Department of Theater and Dance produces Richard III podcast 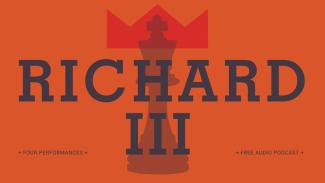 Amid COVID-19 restrictions, AU students, faculty get creative by recording the Bard's play as audio podcast

Originally scheduled as a typical on-stage production, the Department of Theater and Dance is producing a four part live-performance podcast of Shakespeare’s Richard III. Live readings begin with Act I on Wednesday, October 28, at Belk Theater on the Anderson University campus, followed by Acts II and III on October 29; Act IV on November 3 and Act V on November 4.

Twenty-three student cast members comprise the team behind the performance, along with 10 student production staff and three Anderson University faculty members. The podcast creates new potential for an even larger audience than usual.

Anderson University Professor of Theatre Robert Homer-Drummond is overseeing the production. He is excited for the possibilities presented by this new performance medium. He believes that a podcast adaptation of Shakespeare’s play will create an entirely new experience for listeners.

“In this podcast, we will create a rich soundscape that we hope will create a vivid late 15th century world in your imagination,” Professor Homer-Drummond said.

Beyond providing a creative new experience for listeners, Professor Homer-Drummond sees this as an important educational opportunity for students pursuing a career in theatre. The goal is for the podcast production to become a resource for high school students and others who are interested in this form of Richard III, and theatre as a whole.

Professor Homer-Drummond hopes that this will also train participating students in voice-acting, an important skill to learn for those pursuing careers in theatre.

“They have to keep in mind that the only thing they have to convey everything about the character and the situation is their voice,” he said. “It is not easy.”

However, students have stepped up to the challenge, determined to engage in their passion despite the difficulties presented by COVID-19. Theatre is not merely a profession, but a calling, Professor Homer-Drummond said.

“Theatre is about finding some creative way to share our human experience. So, it is crucial that we find a way to do our work – to make our art,” he said. “The format may change. The venue and technology may change. But COVID-19 hasn’t stopped us. In some ways, it has just given us an obstacle that has forced us to be more creative.”

To listen to the South Carolina School of the Arts at Anderson University’s podcast presentation of Richard III, visit richard3.schoolofthearts.com.