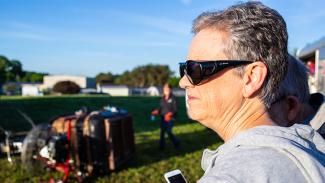 Anderson University Vice Provost Susan Wooten retired in April, 2019. But not before fulfilling a lifelong dream.

For over 40 years, the sun streaming through her car’s window as she drove to work, Anderson University Vice Provost Susan Wooten sometimes noticed something else above the trees.

“Occasionally, I would see a hot air balloon floating through the early morning sky, and I wished I could do that,” she said.

Wooten is an art professor who recently retired after four decades at Anderson University—most recently as vice provost and senior vice president for institutional effectiveness. She took flight in April, on one of those same balloons she often saw on her way to the office. AU provided the experience as a parting gift for a treasured family member who left an indelible mark on the campus community.

“For almost 43 years, I had the privilege of working at Anderson University,” Wooten said. “When I retired, the University made (my) dream come true. The balloon flight was an awesome and serene experience, floating hundreds of feet above the lush spring growth.”

“I am grateful for the many kindnesses offered by Dr. Whitaker, the trustees and my colleagues as I retired,” she said.

It’s a season of old and new experiences for Wooten.

New? The balloon ride, certainly. And also the experience of receiving an honorary doctorate during Anderson’s upcoming commencement exercises, scheduled for Saturday, May 11.

But in a way, graduation is old hat to Wooten as well. By her estimation, she’s probably attended close to 70 ceremonies over the years.

“Since I was a young child and attended my first commencement with faculty in their academic gowns and beautiful colored hoods, I have always been thrilled at the pageant of a commencement ceremony and the tangible sense of expectation that surrounds these events for the future success of the graduates,” she said. “It is truly a celebration of what they have accomplished and a sending-out to what is to come. It is a ceremony that is filled with joy.”

That joy is bittersweet for those who’ve worked alongside Wooten. Her colleagues are effusive in their praise.

“It would be hard to overestimate the influence that Susan has had on Anderson University,” said Dr. Ryan Neal, Anderson University’s provost. “We could fill an entire volume in an attempt to share the profound impact that she has had throughout her many years of devoted and dedicated service. Regardless of official title or role, she has been a capable mentor, gifted artist, thoughtful administrator, careful critic and, most importantly, a determined student advocate.”

Wooten is on to the next step of her journey. Painting. Reading. Traveling. Volunteering at church. “Pretty simple, and very nice,” she said.

But no matter where that journey leads, Anderson will always hold a special place in her heart.