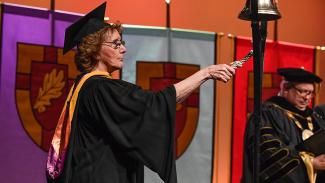 Anderson University will celebrate Founders Day on Wednesday, Feb. 12. Alumni, faculty, students and friends of AU are invited to attend the Founders Day convocation at 10 a.m. in Henderson Auditorium.

The convocation service will include an address from William “Bill” T. Manson III, chief executive officer of AnMed Health. Accomplished alumni will also be recognized with the Young Alumnus Award and Alumni Achievement Award.

Prior to being selected as chief executive officer of AnMed Health, Manson served in a plethora of notable positions including president and chief operating officer at AnMed health. Before coming to Anderson, he worked in the education and healthcare divisions of The Duke Endowment for four years, where he developed an interest in healthcare management.

He holds a bachelor’s degree from Davidson College in Economics and a Master of Business Administration from the University of North Carolina at Charlotte, and he received a certificate in healthcare management from Duke University Health Administration Improvement Program.

Manson is also involved in the community and has served the United Way of Anderson County, the Anderson Area Chamber of Commerce, Success by Six, the Anderson Free Clinic and First Presbyterian Church of Anderson, his home church.

Research scientist Dr. Jarred M. Whitlock, class of 2013, will receive the Distinguished Young Alumnus Award, an award presented to an alumnus no older than forty who exemplifies in his/her life the educational philosophy of Anderson University.

Dr. Jarred Whitlock’s graduated from AU with high honors then earned his Doctor of Philosophy degree from Emory University. He secured a Ruth L. Kirschstein National Research Service Award (NRSA) Fellowship from the National Institute of General Medical Sciences, and the Society of General Physiologists recognized him for his research at their annual meeting in 2016.

Whitlock is a postdoctoral fellow at the Eunice Kennedy Shriver National Institute of Child Health and Human Development in Bethesda, Maryland. His research focuses on the placenta on a cellular level in an attempt to find the cause behind pregnancy-related diseases.

Robert B. Wilson, class of 1982, will receive the Alumni Achievement Award, an award presented to an alumnus for his/her significant achievements in his/her professional career. Wilson is the President of Anderson Federal Credit Union.

Wilson holds a bachelor’s degree in financial management. He entered the field in 1985 as a bank examiner for The State Board of Financial Institutions, representing the state of South Carolina for eight years. He then worked as comptroller for the Carolina Corporate Credit Union from 1993 to 1995 before securing a position with the Anderson Federal Credit Union.

Since its founding in 1953 with 10 members, Anderson Federal Credit Union has grown to be one of the largest credit unions in the state of South Carolina — currently boasting over 13,000 members and offices in three locations including the city of Anderson.

Wilson and his staff support AU — in particular, the athletic program including sponsoring a scorer’s table and the Gold Standard, which honors student-athletes for outstanding accomplishments on and off the field. Additionally, they support community organizations including Anderson Interfaith Ministries, Hospice of the Upstate and Meals on Wheels.

Through the years, Founders Day has become a time when alumni, friends, faculty and students pause to remember the dedication and devotion of the friends and founders of Anderson University.

“Founders Day is a wonderful time for us to come together and all celebrate the place that wouldn’t be here without the people who have come before us,” said Jason Rutland, associate vice president for alumni and parent engagement.