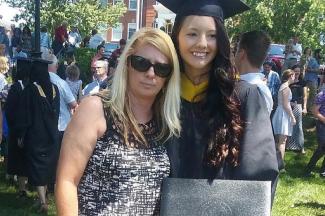 The loss of her mom prompted Seanna Miller to champion the cause of providing safe meds for cancer patients.

Not long after Seanna Miller graduated from the Anderson University College of Arts and Sciences with her biology degree, she experienced a painful loss, which prompted a new direction for her future.

The year Miller graduated from Anderson—2016—her mom, Crystal, found a knot in her arm. The knot was determined to be a swollen lymph node and examination up the arm resulted in discovering a breast mass. The original knot, a swollen lymph node, turned out to be a symptom of stage four breast cancer. It was October 20.

“It had metastasized into multiple areas of her body, including her bones,” Miller recalled. “But she didn’t have any other problems. She didn’t even know the mass was there.”

“She got her port on October 31, 2016 (even had me drive her to take my niece out trick-or-treating one last time—still slightly loopy from Anesthesia) then went to her very first treatment on November 14. When we first got there, her treatment team got her ready and the last person to come talk to her was the Oncology Pharmacist of her treatment team,” Miller said.

Miller’s Mom was anxious and upset about the therapy, but Seanna saw how this clinical pharmacist showed compassion on her mom. That PharmD’s lighthearted humor turned her mom’s tears of fear into tears of laughter and Miller witnessed a human side of medicine.

Unexpectedly, the chemotherapy sent her mom into shock resulting in symptoms of acute respiratory failure. She was rushed to the Greenville ER, then put on a ventilator in the ICU. Miller’s mom died in her arms six days later from chemotoxicity. It was November 20th. Her battle lasted exactly one month.

“Had she not gotten the treatment, there’s no telling where we would be now,” said Miller, noting statistics for Crystal’s specific kind of cancer pointing to a 22 percent chance of living for another five years. Miller emphasizes that “ this is rare and I know it was God’s will. Her life helps people now even in death. I’m not saying we shouldn’t have tried but I know, retrospectively, we could have done more if we had been educated on personalized chemotherapy options like prior treatment genetics tests and other safety evaluation methods. These options were still very limited at the time but they are more accessible now.”

Initially considering anesthesiology assisting as a career goal, Miller said, “Right after I graduated from high school I did an internship with an oral surgeon and loved the operation room. So, I just started shadowing a bunch of surgeons. I met a plastic surgeon out of Anderson, then an independent surgeon in Seneca and shadowed them for weeks. I did internships with them for a while and found anesthesia let me be involved in many type of surgery. My fascination with surgery was really my only drive though.”

Because of what happened to her mom, having an interest in the power of medications and their effects, Miller redirected and pursued pharmacy school. In her application, Miller shared her mom’s story. She shared it again during the initial interview process and a PharmD made a resonating statement to Miller, “you have a ‘why,’ and it will keep you climbing.”

She was accepted by South University where her journey began.

“I received my acceptance letter on mom’s birthday, which was the same day her headstone was put up, it was a multi-emotional day. Pain and joy, gratitude and grief,” Miller recalled.

Miller looks back on her Anderson University education as one of the greatest decisions she’s made. Transferring from a technical college, her advisor and professors at the College of Arts and Sciences were flexible in helping her transition to a four-year program.

“They allowed me to create a personalized graduation plan, and push myself. When I told them I could do something they let me try even if they had reservations. They taught me resilience and showed me the love of God. These interpersonal skills have gotten me so much further than I ever imagined. AU taught me so much more than science,” Miller said.

Once she made it to pharmacy school, Miller’s motivation to succeed resulted in her becoming a class president, involved in student chapters of the American Pharmaceutical Association (APHA) as policy vice president, the American Society of Hospital Pharmacists (ASHP) as student residency head, and Kappa Epsilon Professional Pharmacy Fraternity as philanthropy chair. Though she was engaged in these leadership roles, Miller felt her involvement was unfulfilling.

“It was student organizations, run by students for students. It didn’t expose me to the action of the industry, I just needed more,” Miller said.

Wanting to Make a Difference

One of Miller’s classmates, Jake Dygert, texted her about NCODA, an organization devoted to educating oncology professionals with different tools and resources so they can provide better care to their patients. At the time NCODA was seeking students to become involved in their new professional student organization.

“We just teamed up and we talked to the organization and we started the very first student oncology-focused organization in the country,” Miller said of NCODA’s first professional student organization. “They invited us to go to a big oncology medical conference. When we got there, we were the only two students there.”

Stephen Ziter, NCODA’s assistant director of Patient-Centered Initiatives, says that from Miller and Dygert starting the first chapter ever, the NCODA professional student organization has spread across the nation and into Canada, and they currently plan to expand into Europe and South America.

“NCODA’s professional student organization currently sits at 35 chapters and over a thousand student members, but back in 2019 that wasn’t the case. In January 2019 there were two student members and that was Jake and Seanna,” Ziter said. “These students started to talk, and students are well-connected, so chances are they know other pharmacy students elsewhere... they just happened to be the first folks who believed in us.”

Miller was pleasantly surprised at the conference when the professionals around them weren’t condescending but rather accepting of her and Dygert as if they were graduates and practicing professionals.

“They let us be around all sorts of  people... We sat in on all of these different events about new up-and-coming medications and small ways to prevent adverse reactions before they can happen,” Miller said. She learned that with most chemotherapy it’s possible to know an adverse reaction is coming and patients can be prepared in.advance. At the conference Miller also got to speak with Buddy Carter, a U. S. Representative from Georgia who is also a pharmacist.

“We really started figuring it out as we went, because it was new. It didn’t exist before,” Miller said of the new student organization. “We were only two students and we got to collaborate with all of these professionals and actually do something that was related to the profession that we would continue to do when we graduated instead of just doing student tasks that were separated from the industry.”

When NCODA began publishing their magazine, an article about Miller and her mom appeared in the second edition.

Miller hopes to do a two year oncology residency, then become an oncology pharmacist. Due to her work as APHA policy VP, she is also considering more future involvement in congressional healthcare work.

Her advice for anyone considering pharmacy or other medical study is to sit in on actual classes, meet more than just the trained tour guide students, and try to get a feel for the demand.

“It is a lifestyle change you should be aware of,” she said. Secondly, Miller recommends finding your “why.” She comments, “When the climb gets steeper, you won’t make it unless you know what’s at the top. Unless you know ‘why’ you’re climbing to begin with. Find your ‘why,’ put God first, and you will reach the peak you strive to.”

Miller’s pharmacy school studies were interrupted recently after she was injured in an automobile accident with a transfer truck. Recovery has been slow, but she hopes to get back on track in the spring. She currently lives in New York City and has transferred to Albany College of Pharmacy and Health Sciences where she plans to continue her education.