Parsons Engaged in Quest for Better Treatment of Age-Related Disorders 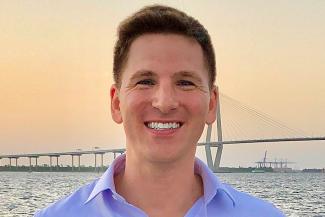 Nate Parsons, a graduate of the Anderson University College of Arts and Sciences, is researching age-related issues affecting sight and hearing.

An Anderson University graduate is getting attention for his research that’s changing the way we look at how aging affects our sight and hearing.

The National Institutes of Health (NIH) presented Nate Parsons, a 2009 graduate of the Anderson University College of Arts and Sciences, with an award that will fund his postdoctoral studies aimed at better treatments for age-related eye and ear disorders.

Parsons received the NIH National Institute of Neurological Disorder and Stroke (NINDS) Blueprint Diversity Specialized Predoctoral to Postdoctoral Advancement in Neuroscience (D-SPAN) Award. Parsons, who is currently a Ph.D. candidate in the Molecular Cell Biology and Pathobiology graduate training program at the Medical University of South Carolina, sees the award as a true blessing as he furthers his neuroscience research.

“This D-SPAN Award through the NIH allows me to arrive at a postdoctoral institution with my own funding, so the mentor I choose doesn’t even have to worry about paying for my research,” Parsons said. “I have the rare opportunity—the golden ticket—to go to any neuroscience institute that I want and do research there.”

Originally from Clifton Springs, New York, Parsons was the second-fastest steeplechase runner in New York State. Weighing multiple athletic scholarship offers, Parsons decided to come to Anderson University on an athletic scholarship and put on the Trojan uniform as a member of the Cross Country and Track and Field teams.

“Anderson University offered me the best package and I ended up loving the people I was going to run with,” said Parsons, who became regional champion in his sophomore year with a 6’3” high jump.

Academically, there were struggles for Parsons, but out of those challenges came personal growth and lasting lessons that serve him well as he builds on his career as a researcher.

“Specifically, the professors at Anderson University helped me grow as a person, taught me how to study and what works best for me in studying,” Parsons said, adding that professors like Drs. Diana Ivankovic and Carrie Koenigstein helped him to hone his study skills and attain academic success. He was also named co-president of the Anderson University Science Club.

Parsons became interested in studying the eye when, after receiving his bachelor’s degree in Biology from Anderson University, he took positions as a clinical optometric assistant and a biomedical ophthalmology technician. This interest led him to his studies at MUSC and his subsequent move to Charleston.

“I applied for some labs at MUSC to get my foot in the door for biomedical research and Dr. (Bärbel) Rohrer gave me an opportunity in her biomedical research lab. She studies aging eye diseases,” Parsons said, noting that a focus is on treating macular degeneration with gene therapy. His work is aimed at trying to mitigate these types of diseases before they lead to permanent loss of eyesight.

“The benefit for gene therapy would be, for example, people with age-related macular degeneration, specifically the wet form, have to get monthly injections of anti-VEGF (Vascular Endothelial Growth Factor) therapeutics in their eye. Performing an injection in the eye monthly is not comfortable, it’s painful, it can cause cataracts and infections in the eye,” Parsons said. “If you can give a patient the genetic information they need in their eye to treat their own disease… if it’s a regulatable gene construct, then you wouldn’t have to go in for those monthly visits.”

“There are a lot of similarities between the eye and the ear as far as a blood barrier and accumulation of junk—oxidized lipids and proteins accumulate over the years as you age—so if we can treat an aging disease in the ocular system, we are fairly certain treat a age related hearing loss in a similar fashion,” said Parsons, noting that pathology associated with the eye is similar in many respects to that of the ear.

In addition to the NIH award, Parsons also received a grant from the Southern Regional Education Board (SREB), which supports state scholars and helps them achieve their academic career goals.

“It’s a training award,” Parsons said of SREB. “It’s like a training grant they give to predoctoral students to help them get on their feet and get a good start until they obtain their own funding.”

Parsons’ advice to anyone considering a similar career path is, “Be persistent. If you want something, it’s okay to fail. Keep pursuing what you want and you will get it eventually.”