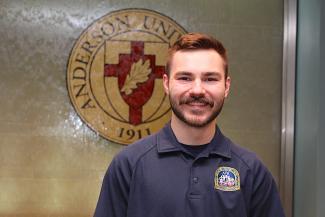 Jonathan Webster says that the classes he took at the School of Public Service and Administration prepared him “incredibly” well for his internship with Anderson County EMS.

In an emergency where seconds count, it’s good to have someone like Jonathan Webster show up.

Ever since he was a Cub Scout, Webster has been impressed by first responders and what they do.

When Webster realized police work wasn’t for him, he considered firefighting, but at his young age, he couldn’t find the kinds of opportunities that were available in law enforcement. His high school guidance counselor suggested he look into a program through River Hills Rescue Squad at Lake Wylie, South Carolina, that took students  along on emergency calls. He jumped at the chance. When he turned 18 he earned his EMT certification and went to work with River Hills Rescue Squad.

“A lot of people don’t know what happens in ambulances, so I got to see that side of it and got interested in medicine through that. You get to see a lot of different sides of things, and people only call you on their worst day. No one anticipates calling an ambulance or 911.”

As hard as things get, Webster says he’s gained enough confidence in his training to stay calm.

“I think it comes naturally because I started so young. I got to see the people I was looking up to and how they reacted,” Webster said.

Webster maintains that his Christian faith also helps him to keep calm. He recalls the perspective on facing challenges given by one of his professors at Anderson University, Dr. Howard Murphy. To paraphrase Murphy’s advice, Webster shares, “Life is arbitrary, but God is not. Life is ever-changing, it’s not consistent, but God stays the same and we can find an anchor in that.”

While a student at Anderson University, Webster worked for Medshore Ambulance Service, and also interned with Anderson County EMS. During his internship, he assisted with planning and logistics operations and was responsible for planning a mass casualty incident (MCI) exercise that involved several agencies across Anderson County.

“The opportunities that AU gave me set me up well for full time employment with Anderson County EMS,” Webster said.

He’s also on the Anderson County Technical Rescue Team, a specially trained group that responds to confined space, high angle and swift water rescues, as well as responses to drownings and vehicles submerged in the water. He also works for Oconee Hospital, going on calls in an area where the lakes meet the mountains. There, Webster recalls helping to rescue a child who had fallen off a waterfall in Oconee County.

For all of the challenges presented by rigorous training and life-or-death situations, Webster still feels he has a great job and at the end of the day is gratified about making a difference in lives.

“There are calls where we actually can make a difference and you get home that night and are like ‘oh my gosh, if we hadn’t been there they probably would have died.’ Whether it’s an allergic reaction or it's a bad car accident or someone has gone into cardiac arrest,  and we can actually make a difference with the medication we give, just being able to get them to the hospital quick—it’s those kinds of things,” Webster said. “I think AU has set me up to have the Christian foundation to revert back to that. Dr. Murphy… we’ve had some pretty candid conversations about coping mechanisms and stuff like that. It’s been great.”

Since Anderson County EMS shares a building with the School of Public Service and Administration, Webster enjoys being able to interact with his professors, who are just a short walk down the stairs.

For those considering becoming first responders, Webster recommends contacting a local EMS service about doing a ride-along or looking into junior explorer or similar programs offered by some agencies. He also recommends that, once into a program, it’s good to ask lots of questions.

“Sometimes it won’t be like what you think it is, other times you’ll fall right into it like I did,” he said.

Webster feels that his upcoming master’s program at Anderson University will help him to be more marketable as he advances in his career.