Palmetto Boys State Back at Anderson University in 2021 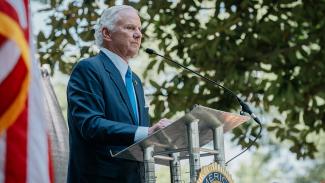 Anderson University welcomed more than 500 Palmetto Boys State delegates to campus this summer, as well as state VIPs such as Governor Henry McMaster.

After a year’s hiatus, more than 500 of the most promising high school leaders from across South Carolina converged on the campus for Palmetto Boys State June 13-19. Palmetto Boys State is a weeklong leadership development program for rising seniors sponsored by The American Legion.

According to Jay Pitts of the Palmetto Boys State staff, Anderson has hosted as many as 1,100 students on its campus since 2011. After taking the summer of 2020 off because of COVID, there aren’t quite as many on campus this year, but the energy of this year’s Boys State is as high as ever. Pitts feels that Anderson’s hosting of Palmetto Boys State has become a wonderful collaboration that has exceeded all expectations.

“There’s no question in my mind that because of this university, because of the love this university gives us … the relationship here, everybody feels that when they come, and the boys have this overwhelming experience—now everybody wants to come to Boys State. Anderson has everything we need and things we never knew we needed.”

Palmetto Boys State was developed to help develop future leaders for South Carolina by allowing promising young men, nominated by their schools and selected by local American Legion chapters, to participate in “mock” government, running for office, drafting legislation and actually presenting that legislation to leadership in Columbia.

Rising seniors divide into mock cities and counties, forming a system of governance mirroring that of the state legislature. Much attention is given to civic responsibility and state and national pride during the event, filled with songs, chants, talent shows, elections and stellar guests.

“These young men are the next generation of leaders for South Carolina and I know the future of our state is in good hands with them leading the way,” Governor McMaster said.

On the morning of Saturday, June 19, parents will join in as Palmetto Boys State concludes with an outdoor graduation ceremony on Anderson University’s historic Alumni Lawn.

“In particular, the leadership class has helped me to focus on the critical qualities which make or break a leader… overall I have had opportunities to practice leadership through campaigns, city meetings and chants,” said Elliott Gray of Walhalla High School, one of this year’s participants.

William Monts, associate vice president and dean of traditional admission at Anderson University, is a 2001 Palmetto Boys State alumnus who represented Dutch Fork High School in Columbia, South Carolina. Monts remembers the strong, lasting bonds with other Boys State alumni and feels the skills he learned have been invaluable.

“One thing that never ceases to amaze me is how much this still comes up in my life, of being a participant of Boys State. I’m constantly in conversations… we’ve got that immediate connection of what it was,” Monts said. “It’s just a shared experience that you’ve almost got to be a part of Boys State to understand. You really learn a lot about yourself. You’re put into situations … you’re kind of throwing yourself out there because speaking in front of others and opportunities like that.”

“In one week’s time, the total strangers I met on day one were family to me by the final day. It brings together so many diverse young men and instills a culture of respect, integrity and brotherhood that stays with you long after you return home,” Cothran said.