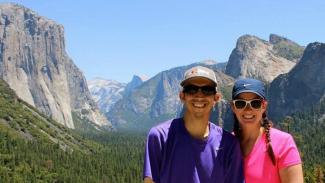 Nolan Gottlieb graduated from the Anderson University College of Health Professions in 2006 and was a member of the Trojans' junior varsity basketball team.

When Nolan Gottlieb reflects on his college years at Anderson University, he remembers early morning workouts, long hours in the gym, shoes squeaking on the gym floor, buzzers blaring and cheers reverberating in Abney Athletic Center.

Anytime the gym doors were open, Gottlieb was there.

Gottlieb, a 2006 Anderson graduate with a degree in kinesiology, played on the Trojans’ junior varsity basketball team his first two years at AU. But making the team wasn’t good enough for him. He felt like he was in over his head, but he was going to do whatever it took to be proud of his spot on the team.

Gottlieb volunteered to become the manager of the varsity team. He worked out, conditioned and practiced with the JV team only to repeat the routine with the varsity team — even when he wasn’t required to be there.

After two years on the JV team, Gottlieb could hold his own in pickup games with the varsity players, and his coaches noticed his dedication; he earned a spot on varsity. In total, he was an athlete and student at Anderson for five years — including his redshirt year.

But through every pushup, sprint and shot, Gottlieb only had 50 percent lung function. He was diagnosed with cystic fibrosis, a progressive disease that affects his lungs and digestive system, as a 3-month-old.

As a kid, he watched Duke’s ‘90s basketball teams on television and played on all-star little league teams. He dreamed of playing college basketball. But when he was diagnosed in 1983, those with cystic fibrosis only had a life expectancy of about 18 years, and doctors even gave his parents a book about how to grieve a dying child.

Cystic fibrosis stunted Gottlieb’s growth when he was in high school, nearly diminishing any notion of playing college basketball. It didn’t stop him from dreaming

But the summer before his junior year of high school, Gottlieb got a feeding tube, a treatment that helps kids with cystic fibrosis get the calories they need to stay strong and grow. He grew six inches and gained 25 pounds in less than a year. He finally had a shot at college basketball again.

Thanks to advances in medicine and miracles, AU made his dream a reality. But that didn’t mean his basketball career — and life — were easy.

Throughout college, Gottlieb went into the hospital on school breaks for routine IV medications. He often came back to school with a PICC line, a long-term IV, in his arm and pulled a basketball sleeve over it.

Gottlieb’s coach, Doug Novak, knew the legendary Patt Summit, the legendary coach of the University of Tennessee Lady Vols, who visited AU to watch the team practice. Gottlieb did an individual workout for her, but unbeknownst to her, he had a PICC line in his arm.

“I like to tell everybody I worked out for Pat Summitt with an IV in my arm,” Gottlieb said.

He also had a scare when he coughed up blood during practice and had to spend a couple of weeks in the hospital. But he never quit, and he never used cystic fibrosis as an excuse.

“I told my coaches, from the first day I showed up, ‘listen, you know I have CF, but unless I mention it, I don’t want you to ever, ever bring it up. If I need a break, I’ll step back for a second. Don’t acknowledge it, don’t say anything about it. I will push myself as hard as I can go,’” Gottlieb said. “To their credit, they never once mentioned it. Not a single time.”

After he graduated, Gottlieb stayed at AU as an assistant coach with coaches Jason Taylor and Jeff Brookman for a year before moving back to his home state of Georgia.

Gottlieb served as a substitute teacher in Georgia and found a heart for education. He earned his Master’s in Teaching from Georgia College. He met his wife, who taught at the school where he completed his student teaching, and he took a teaching job in Milledgeville, Georgia, when he graduated.

As strong as Gottlieb was, his health declined, and his body couldn’t fight the germs floating around classrooms full of children. He taught for five years, but his lung function dropped to 25 to 30 percent.

Gottlieb was finally listed for a double lung transplant. In June 2018, slightly over a year after being listed, he was called in for surgery.

The recovery from a double-lung is usually a months-long process, but Gottlieb recovered remarkably fast. He was sitting up the next day, standing on day two and walking on day three. He was out of ICU in 11 days and out of the hospital in less than three weeks.

“For the first time in my life, as soon as my body started healing, I was able to breathe at full capacity,” Gottlieb said. “And I didn’t know what that felt like. I felt like I had a superpower for several months after surgery.”

“Looking back on it now, I don’t understand how I did what I did,” Gottlieb said. “I now know what normal feels like.”

With a surge of energy and excitement from breathing like never before, Gottlieb ran a 5k just four months after surgery. And he has run a race every month since. He also completed a sprint triathlon at Lake Lanier in September. He hopes to tackle a 10k — and maybe even a half marathon.

“I’ve never been a runner before. I’ve only run because of basketball,” Gottlieb said. “Now I can, so I’m going to just do it. Just because I can.”

Although he can’t return to teaching, Gottlieb has started a new career in real estate in Athens, Georgia, where he and his wife now live. He has also become active in his local cystic fibrosis community. He won the Miles for CF BreatheStrong Inspiration Award for his quick recovery from his lung transplant.

And Gottlieb is now a certified DonateLife representative. He said a lung transplant was life-changing for him, and his goal is encouraging people to become organ donors to save others’ lives.

Even though his college basketball days are over, Gottlieb is still working hard and refusing to let cystic fibrosis slow him down. He stays in touch with many of his friends and teammates from Anderson. And he says he owes his determination to the Trojans.