New Album: 'Redefining AUthenticity' is out 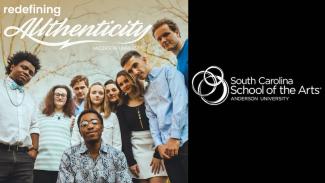 The wait is over. “Redefining AUthenticity” has been released.

This new album represents the combined creative talents of AUthenticity, one of the premier commercial music ensembles in the South Carolina School of the Arts at Anderson University.

The album was recorded in the new music media studios, part of the Johnny Mann Center for Commercial Music. The album is available on Spotify, Apple Music and iTunes. CD’s will be available beginning August 1, 2022.

“Producing and music directing this entire process has been a wonderfully creative and fresh experience for me, and I am totally in love with all eight songs,” said AUthenticity member and recent AU graduate Max Milian, keyboardist, vocalist, and music director for the album.

“We come from different walks of life with different musical traditions, based on our cultural backgrounds and things like that… Every track you’re going to jump into a different musical world. That’s what makes it really exciting,” Milian said.

Creating and performing their own songs helps students grow as musicians, according to Dr. Derick Cordoba, professor of music and director of the Johnny Mann Center for Commercial Music.

“The idea was that they would write songs and we would do some of them in their featured concert. Initially we thought that maybe three songs would be good to do for the concert,” Dr. Cordoba said. “It turned out that the eight songs were great and all very different. Last semester we did a concert called ‘Redefining AUthenticity,’ which was really about bringing all this original music to the group. Everything was so good. We decided that we have eight originals—that’s an album—let’s do an album.”

“Every week we get to hear from a professional in the industry, from someone who’s working and doing one of the things that we’re doing in the classroom we want to do,” said Morgan. “They’re constantly talking about how important it is to network and to get to know others.”

“I think Anderson University is the first place where I feel I can be a successful songwriter. When I brought my song here everyone loved it and I wasn’t expecting that. I sing and write songs. That’s the area I want to go in,” Todd said. “This place provided a good avenue, good honest criticism and also encouragement.”

“Outside of music, the School of the Arts really pushes this idea of being a professional,” Hatten said. “I think striving to achieve (professionalism) every day and all of the time teaches you this code of conduct that makes you continue to push yourself when you fall short of doing those things you feel like are required of you to become what you want to be in the music world. Just having that available to you definitely sets you up for success unlike any other place.”

Sadler Jones, a bassist, drummer, loves working and playing with other musicians as part of the creative process. As a Christian Studies major, Jones feels a sense of belonging as he plays with AUthenticity.

“I feel very much included in part of it and get a lot of merit out of the program even though I’m just a minor,” Jones said. “I spend time working on a song basically. The really exciting part is I get to bring it to fellow musicians and to my friends and their input and we kind of see where it goes. It’s not just like I have to figure out everything and bring it to them, it’s ‘here’s what I have started, let’s talk about it. And that’s a really sweet nice thing to have, is friends. It’s a freeing thing to do that.”

Dalvin Gray, a guest musician, sometimes plays drums for Authenticity which allows Saldler to switch to bass and Otis to switch to keyboards or vocals. He’s related to Hatten and they’ve played together a lot. He says, “I continue to grow and teach myself new skills, watch other people play and pick up on things and try to use that in my everyday life.”

“While we’re refining our craft and preparing great shows, we’re also embarking on a deeply human journey together. That’s been the melody of AUthenticity for the last four years, especially now as we begin to write original songs together,” Milian said. “As you’re opening up your heart to each other, you’re being vulnerable and it provides for all these ways for you to get to know someone and experience life with someone in things that are not put to words or not done through verbal communication, just through playing together. That’s what we’re doing.”

For details about AUthenticity, contact Dr. Cordoba in the South Carolina School of the Arts at Anderson University.