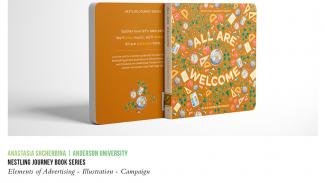 The national ADDY for South Carolina School of the Arts graduate Anastasia Shcherbina is the first in several years.

Anastasia Shcherbina, a recent graduate of the South Carolina School of the Arts at Anderson University, has received national honors for a series of children’s book cover designs.

“This was really shocking for me because I’ve never gone that far into a competition before for graphic design and was even more surprised that I was honored with a national ADDY,” Shcherbina said.

Awarded by the American Advertising Federation, the ADDYs are the nation’s largest advertising competition.

Shcherbina’s cover designs received a Gold District ADDY in April 2021 and was entered in the illustration category Book Design Illustration for the national competition.

“I received my ADDYs for the outer cover design of the books, which includes the illustration front and the design on the back. I also submitted my website and the stickers that go along with the book series as part of the campaign,” she said, adding that the main consideration of the judges was the front illustrations.

Her illustrations were for the Nestling Journey Series of children’s books that educates on the topics of racial and cultural diversity and encourages them to be kind, loving and friendly to all. This series is targeted towards parents who home-school their young children with the hope that they learn these valuable social lessons while they are spending most of their time at home during the pandemic.

Inspiration for the playful, colorful graphic illustrations come from her three-year-old son.

“I made those decisions based on what I see he’s more drawn to and make notes on what exactly doesn’t draw him at all when it comes to books or colors or illustrations,” she said. “Bright color is something they are very drawn to, but also plants and animals.”

Shcherbina’s award-winning design came together during a physically challenging time.

“The day before I started working on the illustrations on this project, I got into an accident. I was driving, got hit from behind, and had a severe concussion,” she said. “It was a really interesting experience, not one I would ever want to relive. Having bad vision, bad speech and loss of memory… I was thankfully able to create all of these books within that week of being diagnosed with a severe concussion.”