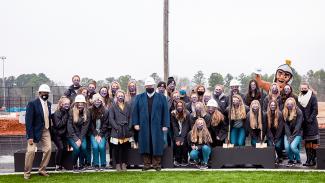 Annie Kate Hodge shared her journey during a recent groundbreaking ceremony for the new Anderson University lacrosse and soccer fieldhouse.

The four core values of Anderson University women’s soccer—or AUWS, as we like to call it—are grit, sacrifice, unity and belief. And if there is one thing that I have learned within my past four years and Anderson University, it’s this: Belief empowers.

Isaiah 43:19 says, “Behold, I am doing a new thing! Do you not perceive it? I am making a way in the wilderness and streams in the wasteland.”

Life will be found here, in the halls and locker rooms and offices of this fieldhouse.

Do you know how many times I have cried in my locker room? Many, many tears of sadness, tears of laughter and tears of utmost joy have been shed there. It has been a sanctuary and place of rest, frustration and celebration. It holds stories and memories that I wouldn’t give up for the world. Life was found there. Life was lived there. And this new fieldhouse with new, shiny locker rooms will be no different.

When I think about my time at Anderson University and as a member of the women’s soccer team, all I can think of is the Lord’s faithfulness. He has proved to be faithful over and over again. You know, when I was first recruited to AU as a high school junior, our coach called me up and told me, “AK, big things are happening here. We’re getting stadium lights!” Just four short years ago, Anderson was celebrating the installment of lights, a simple resource that made a world of a difference for student-athletes. Because of those lights, we were able to have night games where more students could attend. We were able to have later practices so that we could better balance our classes and labs that ran late into the afternoon. And it was just a small thing that made such an impact.

Last year, we were celebrated the completion of our beautiful new turf field. I have the privilege of playing with my best friends and representing AU on this field each and every day. And now we are looking forward to a brand new fieldhouse as well. AU is growing, and it is a testament to the faithfulness of the Lord that is so present on Anderson’s campus.

My four years here have been marked by the faithfulness of the Lord. I have found it in my wonderful team, those 30 women who I love more than anything else in this world. The girls who have seen me at my best and my worst and have loved and supported me every step in between.

I have also seen the Lord’s faithfulness as he has led me through a serious injury. My junior year, I tore my ACL and I had to get surgery. I was unable to do the simplest of things, like walk or even bend my knee. I was unable to run. And I was unable to play soccer for months. But by the Lord’s faithfulness, here I am. Able to stand, walk, run and play soccer. I got to play here on this beautiful field at this wonderful university all fall, and now I get to look forward to playing this spring as well. The Lord is faithful, and he is redeeming every little thing.

Let me tell you a quick story about my many days and hours in rehab during my recovery process. When the coronavirus hit and classes moved online, I had to quickly dig up the roots that I had established with my incredible athletic trainer, Larissa Davis, and my rock-solid local physical therapist, Dr. Tim Drew—the two people that I had seen every day for the first four months of recovery. When I went home, I got in touch with a new physical therapist, Dr. Ken Finley. Now, he had never met me before, he had never seen me play soccer and he had no clue what kind of soccer player I was or what success I might have had in the past. And as he was evaluating my movements and seeing where I was, I became a little self-conscious. I could tell that I wasn’t doing everything right so I made a comment on my movement. He picked up on my lack of confidence, and in that exact moment, he looked me right into the eyes and said, “Annie Kate. You are an athlete. You were an athlete. You will be an athlete. You can do this.”

I was taken aback. This man didn’t really know me at all. He knew nothing about me as a player or a person, but the second he met me and I became his patient, he believed in me. And in that moment, he believed in me more than I believed in myself. He gifted me his belief, and as a result, I was empowered. I worked with him for five months and was able to safely return to sport. All the work, hours, effort and time put in to be able to do the things I love again, through all the change and unknowns of the past year, all of it started with belief.

So, once again, I want to thank you all for believing in us.

The Lord’s faithfulness has come to pass for this team, this program and this campus because of your belief in us and our belief in what the Lord is doing.

Ground is being broken. Seeds are being sown. Life is being found.

“Behold, the Lord is doing a new thing.”  And I can’t wait to see what comes next.

Annie Kate Hodge—known on campus as AK—is a senior biochemistry major from Spartanburg, South Carolina and a four-year member of the Anderson University women’s soccer team. After graduation in May, she’ll enroll in the Anderson University School of Physical Therapy. These are her prepared remarks delivered during a groundbreaking ceremony to announce the start of construction on a new fieldhouse for the Trojan lacrosse and soccer programs. Her speech been edited for length and clarity.