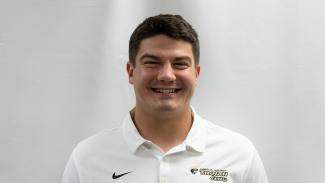 Lacrosse is often described as “the fastest game on two feet.”

It is also one of the most rapidly growing sports in America. With a combination of speed and skill similar to hockey, contact similar to football and the high scoring similar to basketball, lacrosse has really become an attractive sport to today’s young student-athletes.

Traditionally seen as a northeastern sport, lacrosse is growing at a rapid rate. Since 2012, the sport has seen over a 25 percent increase in participation and now has over 1.1 million student-athletes playing across the country, according to US Lacrosse.

These are two of the big reasons Anderson University decided to add men’s lacrosse in the summer of 2019. Last August, Anderson announced that men’s lacrosse will become the next Trojan athletic team, led by head coach Albert Mitchell.

Mitchell came to Anderson after having spent the past two seasons at the University of Massachusetts-Lowell, a Division I program in northeastern Massachusetts. Having served the past two seasons as their defensive coordinator, Mitchell also previously worked at Mercer University, Bryant University and Assumption College. A 2013 graduate of St. Mary’s College of Maryland, Mitchell was a Scholar All-American and two-time All-CAC face-off midfielder. He also earned his master’s degree in higher educational leadership in 2016 from Mercer University.

Mitchell started building the roster of the program as soon as he arrived in Anderson. It only took a week before the first prospective student-athletes visited campus, and just two weeks after the program was announced, AU lacrosse had their first verbal commitment. Between August 5and November 13, National Letter of Intent Signing Day, 19 student-athletes had made their commitment to play lacrosse at Anderson University.

Since the National Signing Day, the AU lacrosse staff has continued hard along the recruiting trail. Currently, Anderson has 34 incoming students from 14 different states for this upcoming fall. The roster is currently made up of students from all over the country, including Arizona, California, Connecticut, Florida, Georgia, Maryland, Minnesota, New York, North Carolina, Ohio, South Carolina, Tennessee, Texas and West Virginia. Of the 34 incoming student-athletes, 30 are freshmen; the others are transfer students.

Not only is this a talented and diverse group, but what Mitchell is most proud of is the academic prowess of these young men. This year’s incoming group has an average GPA of a 3.5, which creates a very positive outlook for the team to complete their first goal, achieving a team GPA above a 3.2.

“We tell every single recruit that comes into my office ‘we want to coach guys who want to be Scholar All-Americans,’ not just great students, not just great players, we want both,” Mitchell said.

This goal is reflective of Mitchell’s vision of the program. Mitchell wants to create a culture in this program that is Christ-centered and is more focused on the growth of each individual player, than it is the wins and losses.

“If we focus on becoming better leaders, better sons, and better students, the results on the field will come,” Mitchell said. “I feel it is too often you see programs focus on the on the field success and not the development of these student-athletes into the men, husbands and fathers they will soon become. Lacrosse is the mechanism that God has blessed us with to be able to teach these men how to grow and become the best version of themselves.”

Even though they have completed the recruiting for their inaugural team, the recruiting has not slowed down for the Trojans. So far, five rising seniors have verbally committed to join the program in the fall of 2021. Interest for the program continues to grow, as they hosted their second Prospect Day Camp in June, which hosted 88 high school student-athletes for a day of what an AU lacrosse practice would look like.

Although lacrosse season is played in the spring, the team will start their first practices this August when the students step on campus. Mitchell said these practices will be fast paced and fun, but will focus a lot on teaching the fundamentals of the game. With 30 of their 34 incoming students being new to the game at the college level, this team will have to learn and mature quickly. They will be tested with some fall scrimmages against some local established opponents like Lander, North Greenville and Clemson. All of this is geared towards preparing the team for their spring schedule.

The South Atlantic Conference is arguably the toughest conference in all of Division II for lacrosse. In the last poll before the season was suspended because of COVID-19, four members of the SAC were nationally ranked, including Lenoir-Rhyne (No. 5), Limestone (No. 6), Queens (No. 13) and Wingate (15). The first official test for the team comes on Saturday, February 6, when the Trojans host Shorter University at the brand-new Trojan Stadium.

“I am so excited for that first game in February,” Mitchell said. “It will be such an amazing day for our players and for our university. February 6thwill mark the official start of a new era at AU, an era in which Anderson is home to the great sport of lacrosse. I pray that we will be able to bring a new, positive dynamic to the school and help add to the remarkable growth that this university has seen over the past two decades.”