Student Takes Lead in Musical, But Not in the Way You May Think 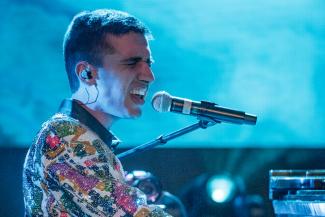 Max Milian, pictured here at the President's Gala, is taking on another sort of lead role, and he’s excited.

A lead role in a student production is usually played out on stage. Max Milian, a student in the South Carolina School of the Arts at Anderson University, has taken on another sort of lead role, and he’s excited.

Milian, a senior from Miami, Florida, landed an internship offering a great opportunity to spread his wings professionally through a key role behind the scenes. As assistant music director for the South Carolina School of the Arts production of "Guys and Dolls," Milian is serving as a liaison for Dr. Howard Kim, associate professor of music and piano.

“Between Dr. Kim and the cast, or Dr. Kim and stage management, I’m his representative at all choreography rehearsals and staging rehearsals, but more practically it means that I’m a rehearsal pianist. So whether it's a music rehearsal where Dr. Kim is music directing, I’ll be playing for him and for the cast, but also at choreography rehearsals when the students are learning the dance numbers, I’ll play piano parts for that, and when they’re doing staging rehearsals I’m bringing in the songs when they come in during the show,” Milian said. “The most exciting part of being the assistant music director is the end goal: that I’m going to get to conduct two of the four nights of the shows. The other two nights I’ll be playing the piano, so basically Dr. Kim and I will switch spots.”

In his years of teaching, this is a new experience for Professor Kim.

“I’ve been doing musical theatre for 30 years now and I’ve never had an assistant below me. I myself was an assistant in professional productions and those experiences taught me how to run things from the music side,” Dr. Kim said. “Max is actually the one who initiated this. Knowing Max’s high level of musicianship, his piano ability and his leadership ability, I knew he could do it and it was right up his alley. He just needed the opportunity to do this, so we made it work with permissions from the Theatre Director and his internship advisor.”

“The fact that we’re able to offer this opportunity is fantastic,” Dr. Kim said. “I hope that future students will ask to do this as well, because once they graduate they have to step out into job opportunities and so I like to give them experience as much as possible. If they ever want to be a director like Max, this is a perfect school in which to grow.”

Milian came to Anderson University with a passion for commercial music and the music business, and feels blessed that The School of the Arts has provided him opportunities throughout his years there to try out a lot of things as he fine-tunes his professional goals.

A Tony Award winning musical fable of Broadway, "Guys and Dolls" is based on short stories and characters by Damon Runyon. Music and lyrics were written by Frank Loesser.

There will be four performances of "Guys and Dolls" October 27-30 at Henderson Auditorium in the Rainey Fine Arts Center. Each performance will begin at 7:30 p.m. Tickets are available online and on the day of each performance. Follow this link to purchase tickets online. Details about Guys and Dolls and other performances of The South Carolina School of the Arts at Anderson University can be found online at andersonuniversity.edu/events.