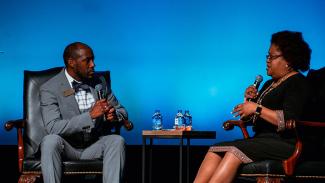 The world was shocked by such evil and injustice. The grief is still nauseating. But Denise McNair’s parents looked evil straight in the face, and they responded with love.

This is the world Lisa McNair was born into. It was the heart of the Civil Rights Movement in Birmingham in the 1960s. And as Lisa McNair grew up in the wake of her sister’s death, she understood that Denise McNair’s legacy was not only a pivotal moment in U.S. history but a part of her family — and a part of her story.

“It was difficult to wrap my head around why we would hate each other or why somebody would not want to be your friend or was mean to you just because,” Lisa McNair said. “I think that’s a painful realization you have to learn as a human being: that everybody isn’t nice. But also, a lot of times, hurting people hurt people. So a lot of people hurt people because they are suffering and have been hurt by someone else. If they had someone to care for them and love them, they might not be an unpleasant person.”

For decades, Lisa McNair saw her father take stages across the country and share his daughter’s legacy and his faith in God that enabled him to show love instead of hate. She said her father even made a public announcement just after the bombing to admonish people not to riot and fight.

“His way of dealing with that whole thing was to show love and not show anger,” Lisa McNair said. “Some people found that to be totally brave, that he could be that way after his daughter had been murdered … by racist, evil people.”

But by the 50th anniversary of the 16th Street Baptist Church bombing, her father’s health was declining. With an influx of speaking engagement requests on the anniversary year in 2013, Lisa McNair began filling in for him. She said it is now God’s calling on her life to carry on her sister’s story and spread the stories of her own life.

Lisa McNair said it is important for young people of all races to know how people fought for freedoms we enjoy today, freedoms that many take for granted.

“Just a short, short 50 years or so ago, you all could not be in the same college, and for no other reason than legally people were not allowed to do so because of the color of their skin — not for any legitimate reason,” Lisa McNair said. “And I think you guys need to know how people fought and bled and died for that right, the right that we’re supposed to have automatically as citizens of the United States. But somehow they had to fight for it all over again.”

As she speaks to audiences filled with college students, Lisa McNair thinks of her sister and Addie Mae Collins and Carole Robertson and Cynthia Wesley. She wonders where they might be today and where their children could be if their lives had not been cut short.

“I think it’s important that they didn’t die in vain; they made the ultimate sacrifice,” Lisa McNair said. “They could be here, they could have kids going to college at your college. But they didn’t get that opportunity. That was denied them. Learn the lessons of their lives and how hate does kill. It killed four little girls who were just going to church to learn. That day the lesson was a love that forgives. ”

Lisa McNair believes this message is critical to the world right now. She wants people to listen to her message with their ears and their hearts, and she prays her story will start conversations.

“If we don’t know our history, we are destined to repeat the history,” Lisa McNair said.

“He believed in the Word of God and the constitution of the United States, and that ultimately the lawmakers of this country would do the right thing, as they were supposed to do. He believed in the system,” Lisa McNair said. “But he sacrificed. He didn’t have to do it.”

Lisa McNair said the world is a different place today than it was in 1963 because of the sacrifice of men and women like Martin Luther King Jr. and her sister, but she says that we must continue to guard against evil as we move forward into a new decade.

She says her message is not one of gloom and doom but one that includes laughter and comedy, and one that offers a unique perspective that will help the world move forward.

“It is a great pleasure to have Lisa McNair on our campus,” said Dr. James Noble, Anderson University’s vice president of diversity and inclusion. “I believe that her message of hope will stir our hearts with joyful praise but also challenge us to have an uncommon unity rooted in Christian love, which is the love that was at the foundation of Dr. King’s movement.”