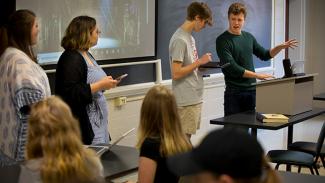 Students at Anderson University have flocked to a new course being offered on the works of "Hamilton" creator Lin-Manuel Miranda.

Anderson University brought Broadway to the classroom with an innovative new English course that focused on award-winning writer and performer Lin-Manuel Miranda.

The class, “Creative Inquiry Through Literature,” most notably featured Miranda’s works on “Hamilton: An American Musical,”and “In the Heights.” Dr. Drew Stowe, a professor of English who taught the “Hamilton” course, said that he is aware that some universities have studied “Hamilton” from a historical perspective, but a literature course not only on “Hamilton” but also on the works of Miranda is on the cutting edge.

“In literature, we talk about authors across different periods, but for this class it’s wonderful to check Twitter and see the latest from Lin-Manuel Miranda. It adds depth to a class to be engaged with a creator who is engaging with the world at present,” Dr. Stowe said.

The “Hamilton” course let students explore literary history as it is being written. In addition to “Hamilton” and “In The Heights,” students studied other widely recognized works that Miranda has been involved with, including “Moana” and “Mary Poppins Returns.”

“The language and its rhythms, and the skill that the stories are told with in ‘Hamilton,’are absolutely among the most clever and purposeful wordsmithing I have ever seen or heard in any context,” Dr. Stowe said. “I’m not the first to say it, but I think Lin-Manuel Miranda is a modern Shakespeare, and I believe his works will be remembered in 300 years. It’s a testament to Miranda’s creative genius: working hard and surrounding himself with brilliance; that this musical has been able to capture the popular zeitgeist has made the class popular on campus.”

The relevance of Miranda’s works also gave students a firm understanding of Miranda’s cultural context that allowed them to analyze his works in a distinct way.

“One of the great struggles in teaching literature is to take a popular work of a time and explain the social circumstances that made the work so vibrant at the time,” Dr. Stowe said. “In class we are dealing with material that was recently created so I don’t have to explain why it is popular; the students already get that. This allows us to really look at the work in an incredibly detailed, nuanced way to discover all the different creative elements that are in the musical.”

“(The class) was very interesting in that we took a musical and viewed it through a literary lens—something I had never done before,” said AU student William Bell. “It has piqued my interest because it made me realize that literature is all around us and isn’t necessarily limited to books with decaying spines and yellowed pages.”

As the course title suggests, creativity was an important component of the “Hamilton” course as well. For their final project, students created their own spin on Miranda’s canon by generating a musical scene and explaining why they think their piece could add something to any of Miranda’s works that they studied throughout the semester.

“Dr. Stowe’s … class asks students to approach literature as an active, creative and collaborative process,” said Assistant Provost Dr. Nathan Cox. “There are many excellent literature courses that engage students with outstanding classic texts that have withstood the test of time, but this course focuses on more recent and familiar pop culture examples. Students explore creative processes that lead to powerful and relevant story telling through a variety of different genres, including musical theatre, animation and others.”

“One of the main goals of this class is to help students move beyond thinking about creativity and to move toward being creative,” Dr. Stowe said. “As much as anything, it is designed to help people consider that it took six years and hundreds of hours from numerous people to make ‘Hamilton’ come to fruition. Thus, if you have a thing you are passionate about, it’s going to take a lot of work. You are going to have to leverage the collective intelligence of the people around you.”

The course was nearly full this semester, and Dr. Stowe said it will likely be offered again in the future.

“This is a class that helps people pick apart the different levels of nuance and meaning and creativity, and I hope students can go out of my class and appreciate the beauty of around them and that it will help them write the world in a way that is more beautiful as well and for them to be creative in doing the things they do,” Dr. Stowe said.