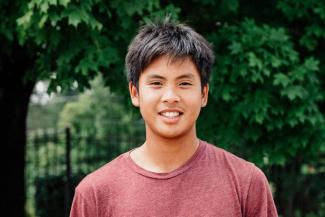 Heimanarii Lai San of the Trojans Men’s Tennis team will compete in the Davis Cup September 11-19 in Amman, Jordan.

Heimanarii Lai San, a student in the Anderson University College of Business and a member of the Trojans Men’s Tennis team, will represent his home country of French Polynesia for the Davis Cup September 11-19 in Amman, Jordan.

Lai San, a junior majoring in Business and Management, recently transferred to Anderson University from a junior college in South Carolina that originally recruited him. Tennis has been a major part of his life since age five. Before he was recruited to play tennis in the United States, Lai San lived in Australia for a year where he practiced to become a better tennis player.

“I got interested in tennis thanks to my dad, a tennis coach. I automatically picked up a racket at a very young age. My dad wanted me to do some activities because I was spending too much time on video games,” Lai San recalled. “He took me to his tennis club and I liked it. I just kept playing. Now it’s been 15 years since I first played.”

Lai San went on to compete in the Pacific Games, winning the Bronze Medal for his French Polynesia team in 2019.

He said, “In 2019 I made it to the semifinals and did well. The Davis Cup Committee in our region made the team and chose the players. Since I did well in the Pacific Games, that’s how I got on the team.”

Lai San got the attention of Trojans Head Men’s Tennis Coach Joey Eskridge when they would play his former team. Eskridge knew this particular team had some strong tennis players, but Lai San really stood out.

“Heima beat my top recruit two years ago and he really impressed me as a player. What was even more impressive was his composure on the court during that match,” Eskridge said. “We are proud of him for being selected to represent his country in the Davis Cup and wish him the best. He will be representing his homeland, but also his AU tennis family on one of the biggest stages in the sport of tennis.”

Lai San hasn’t been on Anderson University’s campus long, but he already feels like part of a special family. He’s also stoked about being able to practice and play at tennis facilities that are an improvement over having to play at a public tennis court when he played at his previous college.

Gratified by the supportiveness of his coaches, as well as faculty, staff and students at Anderson, Lai San said, “I really appreciate that they support me for this. I think they understood that this was important to me. They were also so happy for me, all my teachers and the people working at the International House. I appreciate the fact that they are willing to help me though I won’t be in class. Back in my country I don’t think I would be able to do this.”